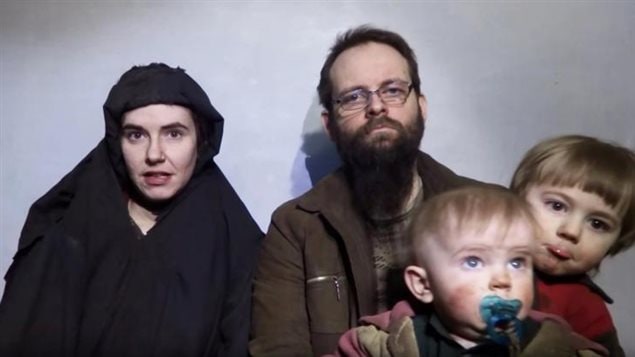 An image from a video posted on the net by the Taliban on December 19, 2016 . It sshows American Caitlan Coleman (L) speaking next to her Canadian husband Joshua Boyle and their two sons.
Photo Credit: screen grab-taliban video-YouTube

Islamist extremists have released another video of a captive Canadian-American family who have been held since 2012.

American Caitlan Coleman who was pregnant at the time, and her Canadian husband Joshua Boyle were on a backpacking trip in Afghanistan when they were abducted.

Boyle had previously been married to Zaynab Khadr, the sister of former Guatanamo prisoner Omar Khadr who had been accused of killing a US soldier in Afghanistan.

The video shows for the first time, the couple’s two young boys born in captivity.

In the video, Coleman mentions that her two surviving children, have seen their mother defiled and called their ordeal “Kafkaesque”. It is not clear what is meant by “surviving” children

Two senior members of the Taliban telephoned Reuters to say the video had been sent to Canadian and American officials before being posted on YouTube by the Haqqani network.

In the video she said that they were aware that “both sides hate us” but called on US President Obama, and President-elect Trump to make a deal with their captors.  it was not clear whether she was reading from a script or speaking her own words. In the four minute video she said, “We understand both sides hate us, and are content to leave us, and our two surviving children, in these problems. But we can only ask that somebody will recognise the atrocities that these men carry out against us as so-called retaliation.”

Canadian officials said they were studying the video. Michael O’Shaugnessy, a spokesman for Global Affairs Canada, said, “”We are deeply concerned for the safety and well-being of Joshua Boyle, Caitlan Coleman and their young children and call for their unconditional release”.

US officials made no comment but referred reporters to a statement made after a previous video of the couple was released in August.

That statement called for the family’s “immediate release on humanitarian grounds” and said the US was working aggressively to bring all American hostages home.