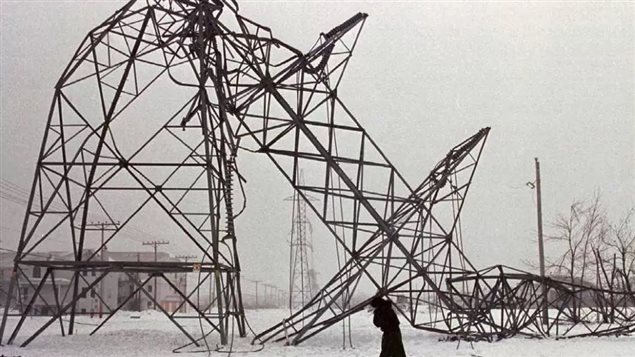 A woman walks past a downed hydro pylon near St-Constant, Que. just south of Montreal, after one of the worst ice storms in Canadian history struck eastern Ontario and Quebec in January 1998. Thousands of transmission pylons and power poles were brought down by the weight of the ice.
Photo Credit: Robert Galbraith/CP PHOTO

For some people in eastern Ontario and southern Quebec the start of this new year was a worrisome case of déjà vu.

On Tuesday, Jan 3, 2017, freezing rain fell throughout the region, but then fortunately stopped. Yesterday however, snow and very strong winds became a blizzard with occasional white-outs that brought down ice-laden branches onto power lines and as of this morning some 35,000 homes in the region are still without electricity as the winds and snow squalls continue to move eastward.

This was a reminder of the great and deadly ice storm exactly 19 years ago to the day, that swept through the region in 1998

It has been called one of the worst natural disasters in Canadian history.

As people throughout the region and into the northern US states and Quebec began to awake on the morning of January 5th, the sleet had begun to build up on cars, streets and sidewalks, trees,  power lines, indeed everything. The first blackouts began in neighbourhoods and farms, as ice covered branches broke off taking some power lines down.

A unique combination of weather systems had formed over a huge swath of the two provinces, from Kingston, Ontario in the west  including northern New York State in the US, up to Ottawa Ontario in the north, to Montreal and throughout much of Quebec’s Eastern Townships to the east.

The systems converged and lingered as more freezing rain fell in a series of three to five successive storms which built up layer after layer of sleet on everything for the next 5 days not letting up until January 10th.

Thousands of trees and branches began breaking under the weight, snapping power lines as they fell.

Then the giant pylons supporting the high-power transmission lines supplying Montreal and much of the southern and eastern portions of Quebec began collapsing under the weight of the ice.

They had been reinforced to much higher standards following those earlier ice storms in 1961 and 1986.  They could withstand up to 45mm of ice accumulation,  a tolerance much higher than the Canadian standard of 13mm.  It was thought they were indestructible.

However as wave after wave of sleet storms swept the area, the ice built up far past their engineered tolerance levels.

It was too much. The towers began to crumple under the weight.

When one collapsed it would result in additional strain on others and like dominoes, over 1,000 of the electrical transmission support structures, crumpled or snapped: large and medium pylons, and power poles.

Depending on location anywhere from 85 to over 100 mm of rain, sleet and snow fell during the period.  The largest previous ice storms, Montreal in 1961, and Ottawa in 1986 had recorded only 30 to 40 mm of ice.

Without power in the chill winter weather over 100,000 people were quickly forced from homes into hotels or other shelters with emergency power backup, a number that quickly grew to double that number.

Kept secret so as not to induce additional panic was the fact that power had been lost to Montreal’s water filtration plants. This meant that potable water supply from reservoirs was almost gone before the situation began to be resolved.

An emergency was quickly declared and the military was called in to clear roads of branches and debris, bring help or remove stranded families in remote locations, and help with repairs to power lines and other infrastructure.  It was the biggest deployment of Canadian military forces since the Korean war with 16,000 troops called in, 12,000 to Quebec, 4,000 to Ontario, in the biggest peacetime deployment ever.

Although accounts vary, at least 25-30 deaths in Canada were attributed to the ice storm, several from carbon monoxide poisoning as they tried to heat their homes with gas barbecues and other means, and about 10-15 in the US.

At it’s height, several million people throughout the provinces and US states were without power, some blackouts lasting for weeks before crews were able to restore power everywhere.

It was also one of the most costly natural disasters in Canadian history as well. Although figures vary greatly depending on sources and methodology, estimates of economic activity loss were between one and three billion dollars.

There were also some 600,000 insurance claims totalling over a billion dollars. Another billion was spent on Hydro infrastructure repairs, another billion on provincial government costs, and millions of dollars in expense incurred by the federal government and military.

Although nothing of this scope has occurred since, there have been other major and highly damaging ice-storms since the deadly 1998 storm: one in the Toronto area in 2013,  and a lesser one in Montreal in 2015.