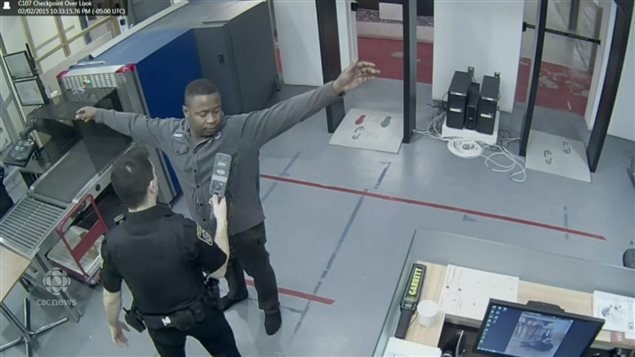 Still photo from internal security video shows Lawrence being checked with a small metal detecting wand after walking through the main metal detector doorway and setting it off. It was later determined the wand was not sensitive enough to detect the gold inside the *body cavity*
Photo Credit: RCM

UPDATE: The man with the golden bum

It was a rare but certainly interesting case of theft, and the perpetrator has now been sentenced.

An employee of the Royal Canadian Mint in Ottawa was found to have been stealing gold from the mint.

His job at the time was to take small samples from batches of molten gold which would then be tested for purity. He sometimes worked alone and the process meant periods out of sight of the only security camera in the room.

He managed to sell 17 of the pucks for a total of about $130,000. He was caught, not by the mint, but through an alert bank employee where he cashed the cheques.

Lawrence has now been sentenced to 30 months in jail, and pay a $190,000 fine, the estimated actual worth of the missing gold.

Ontario Court Justice Peter Doody also said Lawrence must repay the fine within three years of his release, or be sent back to jail for another 30 months.

Lawrence used the money to buy a house in Jamaica and a boat in Florida.

The judge noted that the evidence was mostly circumstantial as no-one actually saw Lawrence taking the pucks and there was no video evidence although the pucks exactly fit the unique ladle used at the mint, and Vaseline and latex gloves were found in Lawrence’s locker at work. Four unsold pucks were also recovered from a safety deposit box.

Records show Lawrence also set off the metal detector more often than any other employee, but that subsequent checks with a wand did not set off alarms.

The Mint says it since improved its internal security measures.