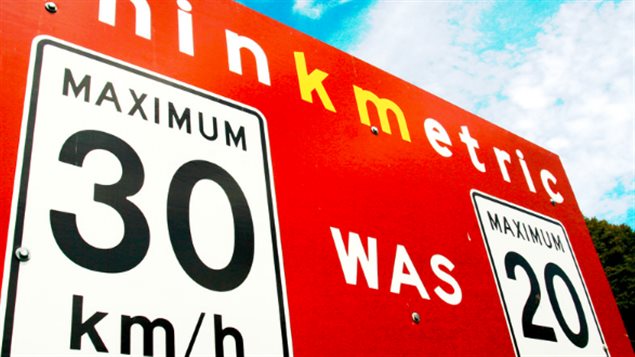 Canada: still confused about measuring since 1975

Canada joined almost all of the rest of world in measurement when it went metric on April 1, 1975.

That was the day when weather reports were given for the first time in Celsius and not Fahrenheit .

The move by the then Liberal government was not well received, and is still to this day not fully implemented.

A metric/imperial mix up led to one of the greatest flying saves ever when an Air Canada passenger jetliner ran out of fuel high over Manitoba and glided to a spectacularly safe landing.

Even today, though they might fill up their car gas tank with 50 litres of fuel, and the odometer might say they’ve driven 40,000 kilometres, and the speed limit on the highway might be 100km/h,  a few people will still say the car gets oh..15 miles to the gallon.

At the lumber store, you still buy 2×4 (2” by 4”) wooden beams, plywood is still sold in 4’ x 8’ sheets, and so on, and apartments and house floorspace is usually measured in square feet, not sq/m.

Although scientists have always known metric is a more efficient was of measuring, Canadians even now have only, sort of , caught on.

A new survey by Angus Reid polling, shows most Canadians use metric for the temperature- (87%), when referring to the weather, but in the kitchen, almost as many, (78%) will use Fahrenheit when cooking.

But the vast majority, 91 pe rcent, will give their weight and height in Imperial measure. Yet, when talking about travel between two cities, most, 66 percent, will express the distance in kilometres.

Because many products, bottles, tins, cartons, are made to US measure, their conversion to metric leads to some odd numbers. For example soft drinks are commonly sold in 12 (American) ounce tins, they are labelled in the somewhat awkward metric measure as 355ml in Canada.  Of course with so much American influence, it is no wonder it’s been hard and slow to make the conversion to metric.

Still and perhaps not surprisingly, the Angus Reid survey shows most younger Canadians, under age 35, tend to use metric more, while those over 55 tend to express themselves more in Imperial.

As for how comfortable Canadians feel with the dual system, those wanting a return to Imperial (16%) are almost equal with those wanting a complete transition to metric (17%) while the majority seems to think the current mix is ok, some 67 %.

Perhaps the only place where metric is not the better system though, is in music. Would “The Who” have had a hit song with “ I can see for kilometres and kilometres”? Or the Proclaimers “But I would walk 500 kilometres..”? And would Harry Chapin’s song- 30,000 Pounds of Bananas” have the same affect with “13,600` kilograms of bananas”, or the 1960’s hit by Keith “Hey 98.6” have quite the same ring as, “Hey, 37.0, it’s good to have you back again”? Somehow, I think Imperial measure will remain in song, long after it fades elsewhere.