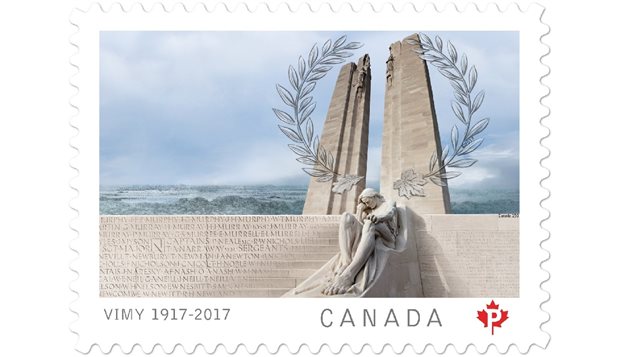 The Canadian stamp showing the two huge towers, the thousands of Canadians killed with no known graves whose names are inscribed on the memorial, and one of the many statues at the monument, this one the *greiving father* on one side of the steps, which matches the grieving mother on the other side
Photo Credit: Canada Post

Special commemorative issue by both countries

At the signal, tens of thousands of Canadians clambered out of muddy trenches and began a march through snow and freezing drizzle across no man’s land near Vimy France.

Advancing uphill behind a Canadian developed tactic of the “creeping barrage” and facing Germany machine guns and shrapnel shells, the Canadians succeeded where other Allied attacks had failed to dislodge the fortified German positions on the high ground of Vimy Ridge.

It was a huge victory for the Allied side which had up to that point had virtually no real success throughout the war.

Now to mark the 100th anniversary, both Canada and France have issued commemorative stamps.

The huge scale of the site is to indicate Canada’s important contribution to Allied victory in the First World War. In the foreground of the stamp is a figure of a grieving father, one of the monument’s statues, symbolizing loss and grief. The ridge behind the monument on the stamp recalls the site of the battle itself.

A series of events have been organized at and around the Vimy Memorial during the week of April 5 to 12, with a special commemorative event at the memorial on April 9 to mark the 100th anniversary of the battle.