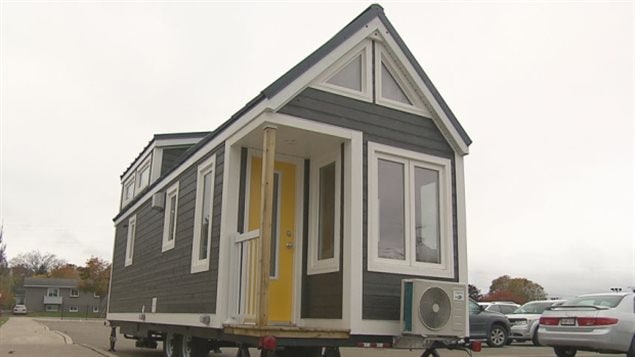 Tiny homes will make up a new neighbourhood in Big Valley, Alberta. This one was built by a New Brunswick home builder.
Photo Credit: CBC

Tiny homes will soon be an option in Alberta. Enough people wanting to downsize to this extent have led to plans for a neighbourhood of the small houses many other Canadians can hardly imagine as more than a playhouse.

Big Valley is 220 kilometres southeast of Edmonton. It is planning a subdivision containing 22 undersized lots measuring 30 feet by 80 feet. An average-size lot in the village is about 50 feet by 120.

“The idea came from someone calling in and asking to put a tiny log cabin in one of our residential districts,” Michelle White, chief administrative officer, said in an interview with CBC Edmonton Radio.

“Unfortunately we were not able to accommodate them because of the zoning of the area.”

But the municipality kept getting requests from people wanting to build homes under 700 square feet, most of whom were not Big Valley residents.

White said the village council presumes many who of those who’ve shown interest in the tiny homes are snowbirds, the people who spend winter in the warm southern United States, while maintaining a Canadian address, they can return to during the spring and summer.

So the council decided recently to change the bylaws to accommodate tiny homes in one area.

“Putting them all together in one subdivision will give unity to the area and a community-type feel,” White said.

There are conditions, however; the homes will have to be constructed on permanent foundations, be connected to municipal water and sewer facilities and have hook-ups for gas and power.

Michelle White said they had to go to the U.S. to look into the regulations for tiny home neighbourhoods, as there is not yet a similar model in Canada.