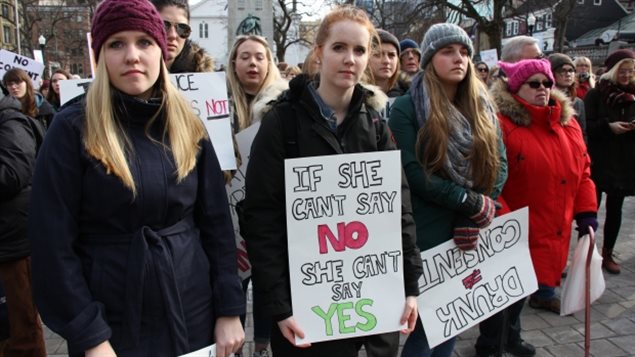 Protests have drawn attention to sexual assault cases that have gone before the courts.
Photo Credit: Paul Poirier/CBC

A new survey suggests 79 per cent of Canadians believe young women are just as likely as or even more likely to experience sexual assault than were previous generations. This view is especially prevalent among women aged between 18 and 35, according to an online survey from the Canadian Women’s Foundation.

Most respondents also believe young women will face other kinds of violence like online harassment, physical violence from a partner, sexual harassment in public and in the workplace. But it’s not clear whether that view matches reality or is just perception.

“Something that was once hidden…more and more women are actually speaking out and so it’s difficult to say whether things are getting worse or if people are just becoming much more aware and speaking out where they didn’t before,” says Paulette Senior, president of the Canadian Women’s Foundation.

Many women responded to the Twitter hashtag #BeenRapedNeverReported launched in 2014 and that drew a lot of public attention. So did U.S. President Donald Trump’s comments about grabbing women’s genitals.

In addition, there have been several court cases in Canada which highlighted sexual assault involving acquittals or shocking comments by judges hearing such cases.

Fear progress will stagnate or erode

The Canadian Women’s Foundation timed its online survey of 1,004 people to coincide with its month-long Campaign to End Violence. It found that one-third of respondents think the country is at risk of losing the progress that has already been made on gender equality and almost half fear there will be no new progress on this issue.

Statistics suggest that only 10 per cent of sexual assaults are reported in Canada and only three per cent go to court. The Globe and Mail recently published extensive reports showing that A far bigger proportion of these cases are dropped by police compared to other criminal complaints.

So, the Canadian Women’s Foundation is asking for changes to the law to make it easier to prosecute sexual assault cases. It would also like to see more public policy to support gender equality and education on the issue.

The foundation raises money for over 450 emergency shelters and violence prevention programs across the country. For example, it funds groups which go into schools to teach young people what a healthy relationship looks like what constitutes consent in intimate relationships.