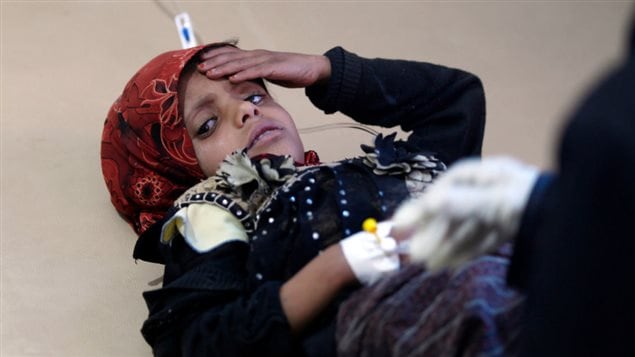 A Yemeni child, suspected of being infected with cholera, receives treatment at a hospital in Sanaa on May 15, 2017.
Photo Credit: MOHAMMED HUWAIS

A deadly outbreak of cholera that has killed at least 124 people in Yemen in the last two weeks has put the limelight back on what many call the Middle East’s forgotten war.

Authorities in the rebel-controlled capital Sanaa have declared a state of emergency and international aid groups are scrambling to try to deal with the outbreak, the second this year.

“According to figures supplied by the International Committee of the Red Cross (ICRC), there are 11,000 cases, 124 deaths in 128 districts out of 333 in Yemen,” Wael Ibrahim, a Canadian who heads the CARE International aid group in Yemen, said in a phone interview from Sanaa.

(click to listen to the interview with Wael Ibrahim)

These staggering numbers are caused by a combination of factors, including the near-collapse of the economy and healthcare system as a result of the two-year war, Ibrahim said.

According to figures provided by the World Health Organization, fewer than 45 per cent of health facilities in Yemen were fully functioning.

Almost 300 hospitals or clinics have been damaged or destroyed in fighting between forces loyal to President Abdrabbuh Mansour Hadi – who is backed by a Saudi-led multinational coalition – and those allied to the Houthi rebel movement supported by Iran.

The civil war has also left 18.8 million people in need of humanitarian assistance.

Because of the collapse of the banking system public sector salaries haven’t been paid in months, there are difficulties importing medical supplies, Ibrahim said.

There has been no electricity in the country for the last almost two years, creating huge challenges for the country’s water and sanitation systems, he said.

“All of that created a catastrophic situation which is unfolding now,” Ibrahim said. “I think the alarming thing is that it is expanding – the number of casualties, the number of people suffering – faster than it had been anticipated by the health experts.”

The near-collapse of the economy is affecting not only the public sector but also the country’s private sector, Ibrahim said.

The private sector is no longer able to export, import, create jobs, provide people with a livelihood, he said.

“This situation has long-term implications for the population,” Ibrahim said. “The world still has not come to full recognition of its impact, we’re still focusing on the emergency phase.”

Another major issue that needs to be dealt with are the severe restrictions placed on the import of goods and the movement of such goods and medicines within the country, said ICRC’s director for the Middle East Robert Mardini.

“Yemen depends on imports. People are suffering and dying not just from the fighting, but from chronic illnesses and disease,” Mardini said in a statement. “We need to see this stranglehold relaxed. It’ll help greatly in the relief of the peoples’ suffering.”

Humanitarian funding is urgently needed to save lives across Yemen, said Jamie McGoldrick, the UN humanitarian coordinator in the country.

“All commitments made during the pledging conference in Geneva need to materialize at once,” McGoldrick said. “While Yemen awaits for peace, humanitarian action is saving lives every day across the entire country.”

Canada is one of the largest contributors to the humanitarian response and has contributed $21.6 million US as of last week. 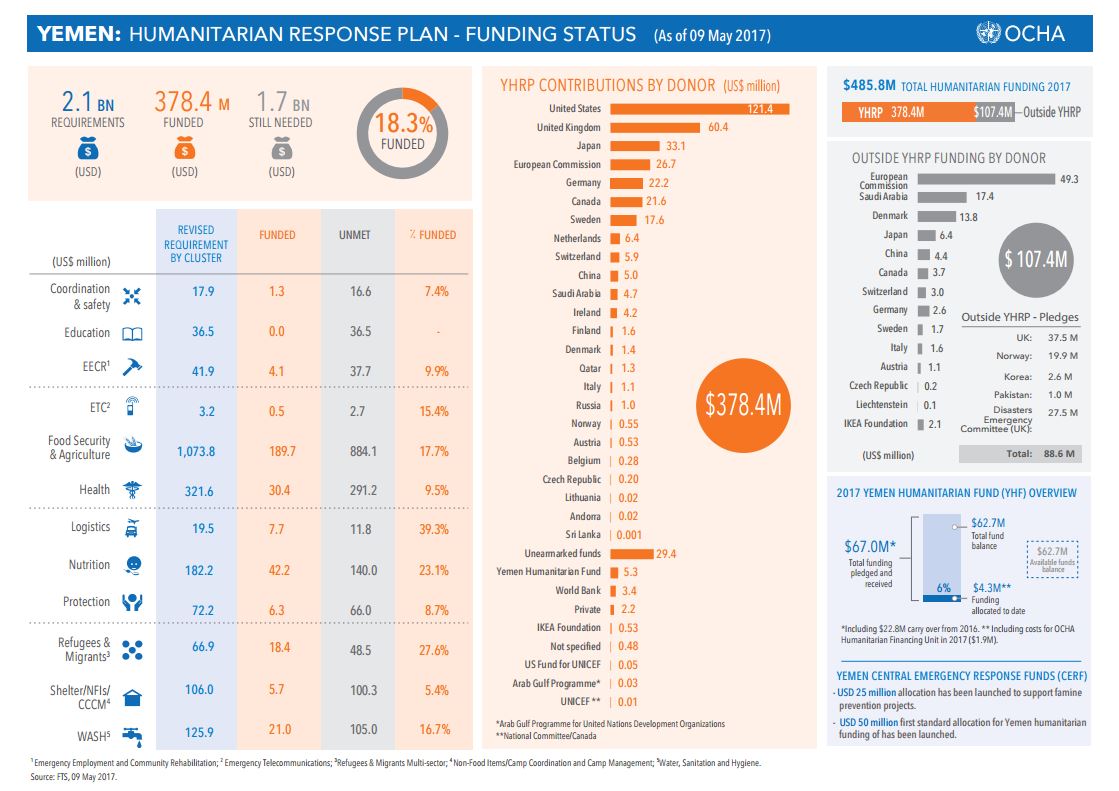