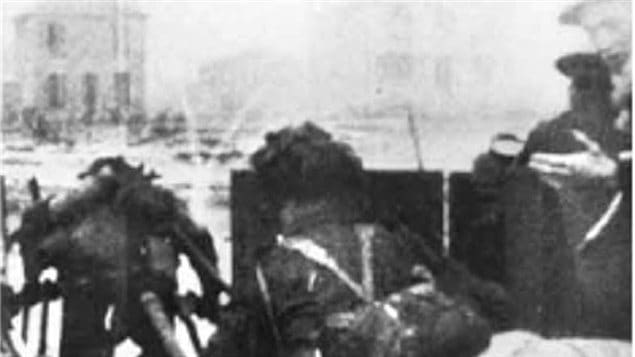 Screen grab of Canadian film footage of the landing of A-Company, the North Shore Regiment (New Brunswick) landing under fire in the early waves of troops onto the beach. The Canadian film was the first to be shown of the D-Day landings.
Photo Credit: Cdn Film and Photo Unit

In the Second World War, the Allies knew they had to attack the German held continent in order to stop Hitler and end the war.

The ‘invasion” actually began in the late evening of June 5 when thousands of paratroops, including about 500 from the 1st Canadian Paratroop Battalion landed in France.

In fact the Canadian paratroops were among the first Allied troops to land in occupied France, touching down about an hour ahead of the main brigade of paratroops in order to secure the drop zone.

As it turned out, heavy German flack forced many of the planes off course, and large numbers of paratroops were widely spread out.

The paratroops initial task was to disrupt communications and supply routes, attack heavy gun emplacements and to generally create confusion to distract from the invasion fleet from the sea.

Then early on the 6th some 300,000 troops were off the Normandy shore and wave after wave braved the hail of shell and gunfire, the mines and steel traps to land and attack the well-defended beach. As they gained the beachhead, massive amounts of vehicles, artillery and equipment followed.

Although the disastrous Dieppe raid landing is often claimed to have been a “learning” exercise, it was really the lessons learned in the Sicily landing of 1943 that were vital in planning and carrying out this massive invasion, the biggest in modern history.

The majority of the men in the Allied forces had never faced an actual enemy, were heading into territory they did not know, and had to bring all their supplies with them. The defending Germans were experienced from years of warfare, had prepared massive defences and defence plans, were well-supplied, and knew the area very well indeed.

Some 14,000 Canadians had been assigned an eight-kilometre stretch of beach and the towns of Courseulles, Bernieres, and St Aubin, a section code-named Juno.  The German bunkers and other positions were to be attacked just prior to landing by 360 heavy bombers and  260 light bombers of American and other allied aircraft, but 97 of the aircraft turned back because of bad weather.

Although many of the important radar stations were knocked out, the preliminary bombardments were not as effective as hoped in knocking out German defensive positions. Because of this the Canadians faced heavier opposition than expected from the German 716 Division, who were in addition well warned of the attack as rough weather had delayed the Canadian landing until 0735.

Nevertheless, within two hours, and in spite of heavy resistance, they had pushed the Germans inland and established their beachhead.
When D-day operations were called to a halt at 21:00 on that historic day, the Canadians had made the farthest gains inland among all the Allied forces.

However, the Canadians would soon face the well-trained and experienced panzer force held in reserve and the fanatical SS Hitler Jugend. By engaging them in fierce fighting the Canadians helped prevent a counter-attack designed to break through the landing force and destroy the beachhead.

“At the end of the day, its forward elements stood deeper into France than those of any other division. The opposition the Canadians faced was stronger than that of any other beach save Omaha. That was an accomplishment in which the whole nation could take considerable pride.”