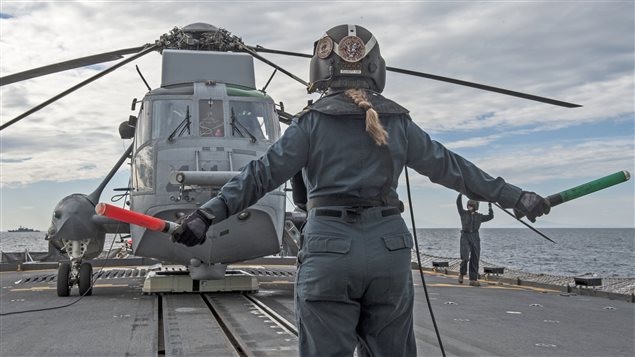 The Canadian Forces has a wide variety of career opportunities and all are open to women. Here, HMCS Fredericton’s Air Detachment deck director signals the deck crew during the start-up of a Sea King helicopter on Operation REASSURANCE on March 3, 2015.
Photo Credit: Maritime Task Force - OP Reassurance, DND

The Canadian Forces are eager to increase the number of women in the military.

There is a perception that women generally are intimidated by the idea of a military career so a new pilot project seeks to give them short information and “hands on” experiences with the military. The idea is to help dispel myths, get a sense of the realities and the many opportunities, and possibly inspire them to join.

The new pilot programme is called “Women in Force”.

It’s a reaction to a survey showing women really don’t know much about opportunities in the military, and what they do know often consists of myths and inaccuracies.

LCol Raby points out that one of the first myths about women in the Canadian Forces is that women’s roles are limited.

She says every career position of the one hundred or so available, is open to women including such things as front line infantry, or fighter pilot.

She also points out that the military would like to encourage women in any role from engineers, to lawyers, pilots to doctors, dentists, nurses, from mechanics to firefighters, you name it, all are open to women and in the army, the air force, and the navy.

The newly conceived pilot programme involves two options for those women interested. The first option is a three-day session which takes place at Base Borden in Ontario for English speakers, and St Jean sur Richelieu in Quebec for Francophones.

These sessions involve a lot of talking and meeting with those already involved in various trades with the military. They will learn about the realities and requirements of military life, and about the benefits and opportunities of which there are many.

The experience also gives a chance for one-on-one connection with women and men now in a variety of trades to learn about them first hand.

LCol Raby also points out that an officer training programme still exists in Canada whereby candidates have their university education paid for, and then sign up (and still get paid!) to serve in their degreed trade for a period of at least five years. Experience has shown that a high percentage choose to continue with the Canadian Forces after that time.

However, this pilot programme is to give a basic familiarization to any adult woman with Canadian citizenship with a minimum of grade 10.

She says once this initial pilot programme ends, the military will discuss the impressions of those involved and adjust future programmes to even better serve women who may be interested in the many trades, skills, and exciting opportunities the military has to offer.

LCol Raby says they are quite pleased with this initial pilot programme as all the 120 spots have been quickly filled with a waiting list.