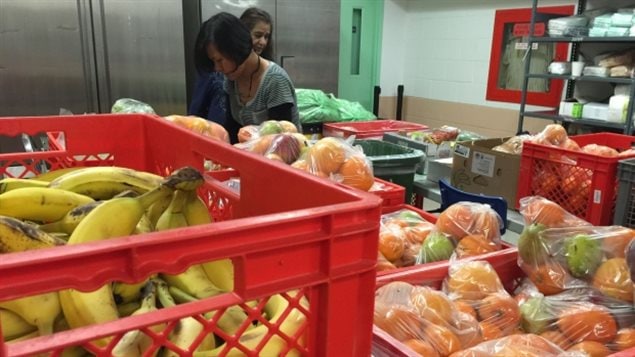 Canada may be a wealthy country, but there are many citizens who have trouble getting the food they need and may rely on food banks.
Photo Credit: Carla Turner/CBC

Guaranteed income is a solution to food insecurity: report

A new report suggests that a good way to address the problem of food insecurity in Canada is to provide a guaranteed basic income to those in need. It’s estimated one in eight households in Canada’s richest province of Ontario is in a situation of inadequate or insecure access to food. That is believed to be slightly fewer than the national average.

‘A wealthy country, but…’

“We are a very wealthy country, but what we are capturing in that number one-in-eight is people that are struggling to afford that the food they need,” says Valerie Tarasuk, professor of nutritional sciences at the University of Toronto and author of the report from the Northern Policy Institute.

“Those are people that, for the most part, are low income and with uncertain incomes and perturbations in their income, so (they are) struggling to make ends meet.”

Tarasuk examined several possible solutions to food insecurity including an increased minimum wage, more affordable housing and public food support programs. Out of the solutions, she found a basic guaranteed income to be the best.

Supporting this conclusion is a study that examined the situation of seniors in Canada. When they reach the age of 65 poor Canadians are eligible for a government subsidy called the Guaranteed Income Supplement.  The study found that seniors who struggled to get food before they reached the age of 65 had much better access to food after getting the supplement.

Concludes Tarasuk: “The truth is we have a very serious problem on our hands particularly given the way that our employment situation has evolved…where we have a lot of people in very precarious circumstances where they’re working only short-term, part-time hours and they’re not able to achieve a solid secure income through employment.

“So there’s a need I think for governments around the world to figure out how to respond to this phenomenon and basic income is something that is being considered in a lot of places.”

The government of Ontario is currently running a pilot program providing a basic guaranteed income to 4,000 people in need.