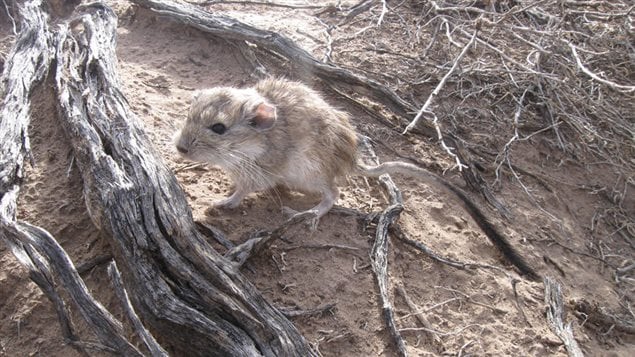 Evans and colleagues from Canada, Argentina, and the U.S. report evidence that the huge genome of the red vizcacha rat – the largest of all mammals – expanded due to the accumulation of repetitive DNA. Understanding that process may lead to greater understanding of the evolution of the human genome
Photo Credit: Andrea Tarquino

How study of a rare rat genome may relate to humans

The study involves an obscure little rodent living in the deserts of Argentina.

Though obscure, the rat is unique in the world. It seems to be the only mammal that has undergone a huge genome expansion resulting in a larger genome than humans, much, much larger in fact.

Ben Evans (PhD) is the lead author of a study of the red vizcacha rat. He is a professor in the biology department at McMaster University in Hamilton Ontario

Professor Evans says this rather ordinary looking rodent has a genome about 2.6 times that of humans. It is the largest mammalian genome known. The genome represents the complete set of DNA.

The study of this rather unique animal is a collaborative international effort involving researchers from Canada, the U.S., and Argentina.

What is also interesting Evans says, is that a close relative to the red vizcacha rat, the mountain vizcacha rat, has a genome about half the size of its cousin.

What he and colleagues are studying is how and why this relatively rapid increase in the genome occurred, and in such a short time span in evolutionary terms.

It may have some role in the animal’s tolerance for an extremely salty diet, one which it’s cousin, the mountain vizcacha, cannot tolerate.

It has relevance to humans as he says at least 20 per cent of the human genome is redundant. He notes that the mechanism for expansion of repetitive DNA in the vizcacha is the same as in humans and contributes to the extra DNA.

He says this may play a role in disease through the interruption of gene function.

He adds that they have a great deal more to learn as their study progresses.