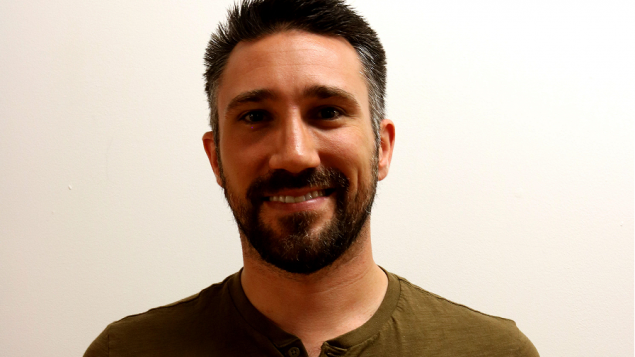 “It has been the goal of every in Inuk in Canada to determine for ourselves who we are and how we are represented,” says the IAF’s Bryan Winters. “It is hard to think of a better representation of a culture than its art, and we must represent ourselves as best we can.” (Courtesy Inuit Art Foundation) 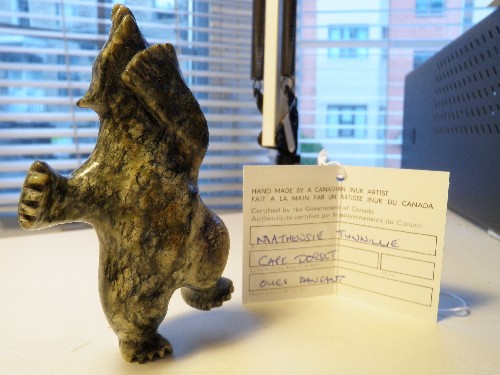 A carving by the late Mathewsie Tunnillie (1984-2009) with its igloo tag listing the artist’s name, community and description of the work. (Eilís Quinn/Eye on the Arctic)

A trademark that certifies Inuit art, and has been issued by the Canadian government for almost sixty years, is now in Inuit hands. 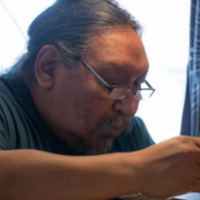 “Me, my parents, we grew up with the (igloo) trademark,” says IAF president Mathew Nuqingaq. (Courtesy IAF)

“It’s our legacy ,” IAF president Mathew Nuqingaq told Eye on the Arctic over the phone from the city of Iqaluit in Canada’s eastern Arctic territory of Nunavut on Wednesday.

“We’ve always felt it was something important because we grew up with it. You could see it on our art, anywhere in the world. That’s something we’re really proud of.”

The igloo tag announcement was made in Iqaluit on July 7.

The trademark  transfer marks an important evolution in the Inuit art world  where the control of the trademark is now in the hands of  and Inuit-led organization, Nuqingaq said.

“It’s a big responsibility and we have a lot of work to do, but we’re going to find new ways to improve it to help our artists.” 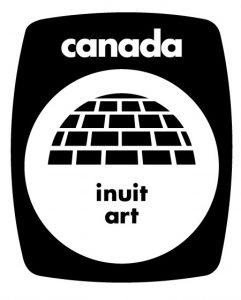 It was developed by the government of Canada after counterfeit, mass-market works began hitting the market to take advantage of Inuit art’s popularity in the South.

The goal was to create a trademark that would protect both Inuit artists and buyers from fake works and ensure the robustness of the Inuit art economy.

Each tag includes an igloo trademark, along with things like the artist’s name and home community, allowing the work’s provenance to be easily authenticated.

“It was really forward thinking at the time,” said Alysa Procida, executive director of the Inuit Art Foundation, about the trademark’s creation.

“It’s somewhat a predecessor to some of the conversations now at the U.N. (United Nations)  about legislation addressing issues around cultural appropriation.”

Listen to more from Eye on the Arctic’s conversation with Alysa Procida, the Inuit Art Foundation’s executive director, where she fills us in on the igloo tag’s long history and what it means for artists today:

Print plates by Jessie Oonark in Baker Lake, Nunavut. Oonark, along with contemporaries like Helen Kalvak and Kenojuak Ashevak, helped make Inuit art famous around the world. (Eye on the Arctic)

Nuqingaq says the IAF began conversations about taking over the trademark a few years ago after the federal government told them they were planning to stop the program.

But the IAF thought the tag was too important to artists and collectors to go away, he said.

“It’s a selling point,” Nuqingaq said. “When collectors see the tag, they know they’re getting the real thing.”

The igloo tag has also evolved to have significant value when it comes to the Inuit art market.

In the 2016 Survey of the Inuit Arts Economy, a report commissioned by the federal government, when art buyers were asked ‘how much they value the presence of an Igloo Tag when considering the purchase or sale of a piece of Inuit art,’ they gave an average value of $117.23.

“In aggregate, that adds about 3.5 million dollars to the Inuit arts economy, which is huge,” the IAF’s Procida said. 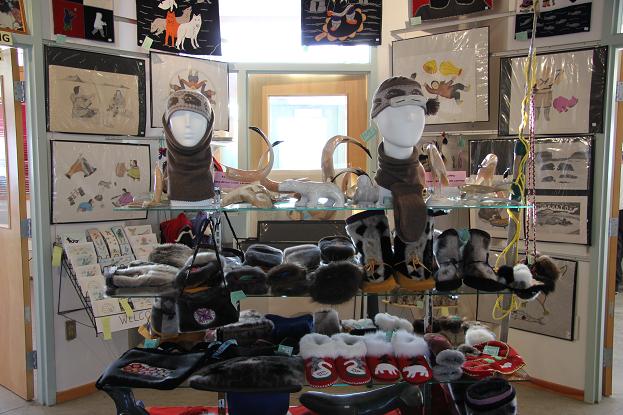 The gift shop at Ulukhaktok Arts Centre in Ulukhaktok, Northwest Territories. How should use of the igloo trademark change in the years ahead? (Eilís Quinn/Eye on the Arctic)

Over the next months, the IAF will hold a series of consultations and discussions with artists and elders across the country to get ideas on how they’d like to see the use of the trademark change and evolve.

Two areas they’ll focus on are expanding who will have access to the trademark and how it will be applied.

Not all Inuit artists have had access to the tag for their work, including those working in Nunatsiavut, the Inuit self-governing region of Newfoundland and Labrador in Atlantic Canada, or Inuit artists in southern Canada,  something that needs to change, Procida said. 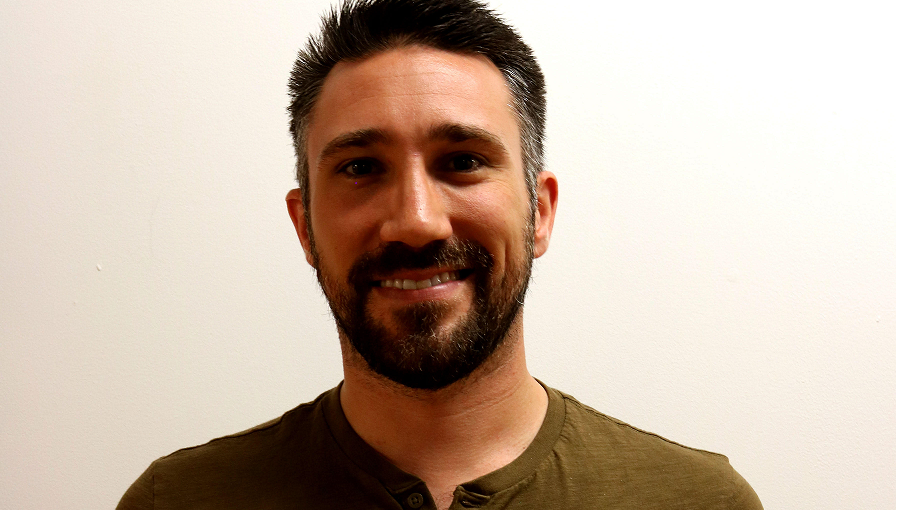 “It has been the goal of every in Inuk in Canada to determine for ourselves who we are and how we are represented,” says the IAF’s Bryan Winters. “It is hard to think of a better representation of a culture than its art, and we must represent ourselves as best we can.” (Courtesy Inuit Art Foundation)

Bryan Winters,  the IAF’s igloo tag program coordinator, says it’s also time for the trademark to be considered for forms of artistic expression beyond carvings or prints, including things like dance or even digital art.

“Inuit art is far larger than what it was recognized as in 1958,” Winters said.

“We have to understand, and respect, that Inuit art is far larger than physical objects – we have performance to consider – all kinds of different aspects of Inuit art have to be somehow encapsulated by this trademark.

“I wouldn’t call it a ‘re-invention’ but it does have to be a re-imagination of where it came from initially.”

How should the use of the igloo tag evolve?

For more on the changing world of Inuit art and how the arts community will help shape future plans for the trademark, Eye on the Arctic checks in with Bryan Winters, the Inuit Art Foundation’s igloo tag program coordinator:

To view Eye on the Arctic’s in-studio interviews with Inuit artists from across Canada, visit our special video section:

The art and artists of Canada’s Arctic 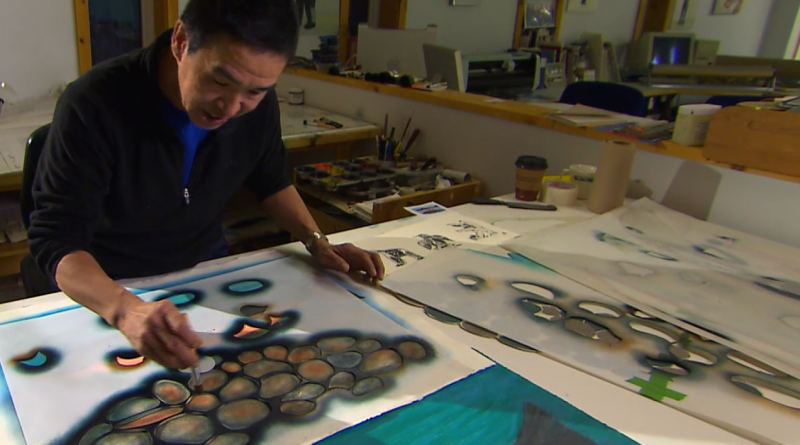 Artist Jolly Atagooyuk working in studio in Pangnirtung, a community in Canada’s eastern Arctic territory of Nunavut. (Eye on the Arctic)