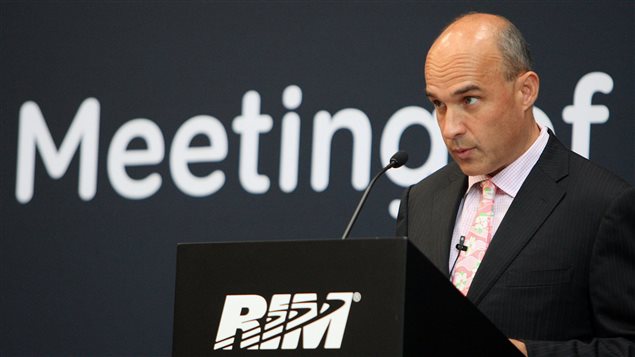 Canadian business leader, seen at the Research in Motion annual meeting in Waterloo, Ontario in July of 2011, is urging the federal government to be vigilant in upcoming NAFTA renegotiations, especially in the area of intellectual property.
Photo Credit: CP Photo / Dave Chidley

NAFTA negotiators get a warning from Canadian business leader

The date is set for the first round of the renegotiation of the North American Free Trade Agreement among representatives of Canada, the U.S. and Mexico.

They begin Aug. 16 in Washington, and one of Canada’s most influential business leaders is warning Ottawa to be “particularly vigilant” when negotiations turn to intellectual property.

Known as IP, intellectual property is viewed as a crucial component of the expanding knowledge-based economy.

The warning comes from Jim Balsillie, the co-founder and former co-CEO of the Canadian company Research In Motion, creator of BlackBerry smartphones and tablets.

Balsillie, who is currently chair of the Council of Canadian Innovators lobby group, has been advising the federal government in preparation for the upcoming negotiations and says Ottawa must arm itself with economic models that highlight the importance of IP to Canada’s prosperity.

He says those models can serve as important bargaining chips.

In making the announcement on the start of talks on Wednesday, U.S Trade Representative Robert Lighthizer said John Melle, assistant U.S. trade representative for the Western Hemisphere, will be Washington’s chief negotiator.

Steve Verheul, who served as the chief negotiator for Canada’s recent trade deal with the European Union, heads Canada’s team.

Kirsten Hillman, canada’s senior official on the softwood lumber file as well as the lead negotiator for the recent Trans-Pacific Partnership talks is also expected to play a leadership role.

Earlier this week, Washington released a document about U.S. objectives for the negotiations, listing 10 goals under the IP section.

The document said Washington wants to break down barriers such as the “burdensome restrictions of intellectual property.”

Canada’s ambassador to the U.S., David MacNaughton, told a meeting of Canada’s premiers and territorial leaders this week in Edmonton that he is pushing hard for a timely resolution of the negotiations but will not accept a bad deal to get it.