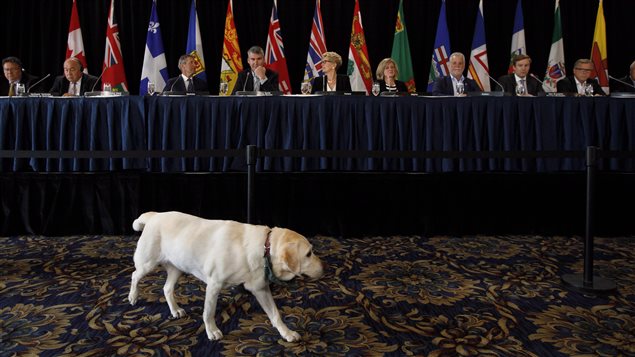 Smudge the hotel dog walks past the stage full of Canada's premiers and territorial leaders during the Council of Federation meetings in Edmonton on Wednesday. The leaders discussed a range of issues, including NAFTA and the date when marijuana should be legalized in Canada, an issue that is remains contentious.
Photo Credit: CP Photo / Jason Franson

Showdown over marijuana brewing between Ottawa and provinces

Canada’s premiers and territorial leaders have wrapped up their Council of the Federation meeting in Edmonton where they discussed NAFTA renegotiations, a boycott of the meeting by some Indigenous groups and what has become a contentious issue: the federal government’s July 1, 2018 deadline to legalize marijuana

At a news conference at the close of the meeting, the premiers said they had serious concerns about road safety, taxation, training for distributors, public education, should legalization move ahead on schedule.

Announcing the formation of a working group to examine the ramifications, the premiers said if they are not satisfied with the findings when the working group reports back on Nov. 1 they will seek an extension on next year’s deadline.

Shortly after the meeting, Prime Minister Justin Trudeau said Ottawa has no plans to alter its timeline.

Calling for a one year extension on the marijuana legislation, Manitoba Premier Brian Pallister said a rush to legalize pot could adversely affect business with the United States as NAFTA renegotiations–set to begin Aug. 16 in Washington–unfold.

How to approach the renegotiations resulted in a split between Saskatchewan Premier Brad Wall and others at the table.

Wall suggested Canada come up with a list of U.S. products it could target should the renegotiations not go to Canada’s liking.

Alberta Premier Rachel Notley disagreed, saying the rest of the premiers feel the country is not at the point of taking retaliatory measures at this point.

It remains unclear how long the renegotiations will last and what exactly is on the table will remain unclear until meetings begin.

The premiers had been scheduled to meet with five Indigenous groups at the meeting, but three of the groups boycotted, saying the Council’s format did not meet their standards for treating them as equal partners.