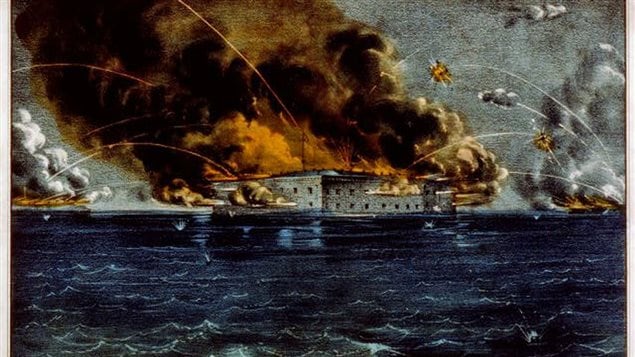 The Battle of Fort Sumter in April 1861. Although the terrific bombardment resulted in only two casualties, it signalled the start of the American Civil War, eventually including tens of thousands of Canadians.
Photo Credit: wiki commons

Remembering Canadians who fought in the U.S Civil War.

Even as debate rages about monuments to historical persons with tainted pasts, a new monument is being planned in Canada which might raise some eyebrows.

It’s to be erected in part by a Canadian group calling themselves “The Grays and Blues of Montreal” and will be located just outside Cornwall Ontario on the grounds of the Lost Villages Museum.

The Grays and Blues are a military hobby re-enactment group named after the grey and blue uniforms of the opposing Union and Confederate armies in the 1861-65 American Civil War.

What is little known is that about 40,000 “Canadians” (British North Americans)  joined in the war, some 4,000 on the Confederate side; quite significant numbers considering there were only about 3-million residents at the time in what shortly afterward became Canada.

Among them was Calixee Lavallee, who fought on the Union side and who would later compose the music for “O Canada” what is now Canada’s national anthem.

Given the recent violent confrontations in the U.S. over the Confederate Flag and statues to Confederate General Robert E Lee, one of the concerns raised is that the Canadian monument makes no distinction between Canadians who fought on the Confederate side, and those on the Union side.

Quoted in the CBC, re-enactor Vince Chiarelli says, “Our interest is in [representing] the Canadians who fought in the war, not the politics of the North versus the South”

Also quoted was the founder of the Grays and Blues, Rob McLachlan who added, “It’s not propagating Robert E. Lee or the Confederacy or what have you. I’s propagating the fact Canadians were involved, and the majority were in the North. It just recognizes that historical fact.”

In a quote in the National Post he also pointed out that political extremists are not wanted in the group, “We’re all level-headed folks, we don’t have any far-right maniacs, racists or anti-semites, we’re just town folks who are interested in history”.

The group has also taken to flying the 1861-63 Confederate national flag, the “stars and bars” over the now much better known Confederate battle flag, which McLachlan says extremists have turned into a symbol of hate.

Member Chiarelli notes that the recent political debate has taken some of the fun out of the hobby.

They point out however that the historical significance of their reenactment is that not only did tens of thousands of Canadians participate in the U.S. Civil War but that once the war was over, the lingering U.S. concept of “manifest destiny” and thus the possibility of a U.S. takeover of British North America influenced the decision of the colonies to unite and form Canada in 1867