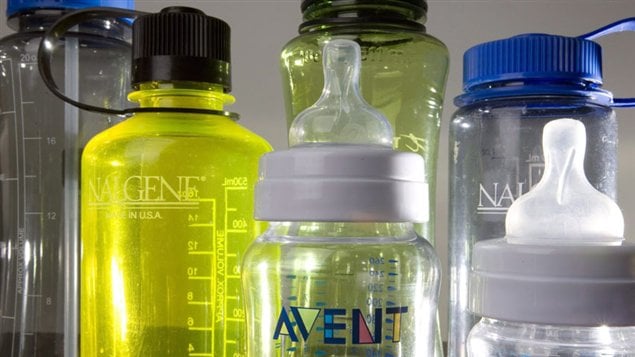 BPA was banned in baby bottles but is still found in other products and most Canadians’ bodies.
Photo Credit: Jonathan Hayward/Canadian Press

An environmental group is calling on the government to enact stronger laws to protect Canadians from toxic chemicals. Environmental Defence cites a government report released today that shows most Canadians continue to be exposed to chemicals like BPA and parabens.

BPA is a hormone-disrupting chemical that Canada declared to be toxic and banned from baby bottles seven years ago. Statistics suggest that nine out of 10 Canadians are still exposed to BPA through things like receipts and beverage cans.

Most Canadians have traces of some types of parabens which are found in personal care products and are also suspected of disrupting the hormone system.

Law could be changed soon

A parliamentary committee completed a review of the Canadian Environmental Protection Act, a law which governs toxic substances. It made 87 recommendations on how to toughen the act.  The government is slated to decide this October whether to make changes to the law. Environmental Defence is urging it to do so.

On the bright side, Environmental Defence says the report shows that eliminating the use of toxic through bans or phase outs makes a difference. Body levels of triclosan appear to be declining. That is an anti-bacterial agent that was added to soaps and toothpastes but was voluntarily phased out due to consumer pressure.