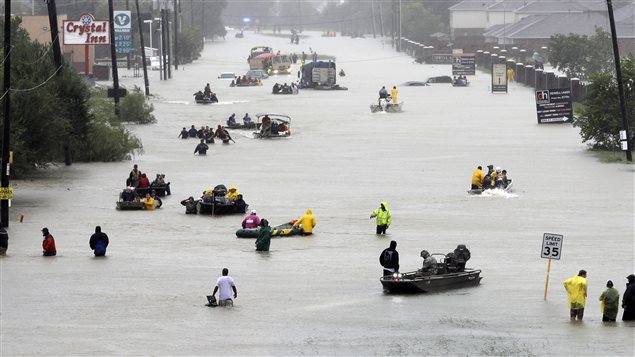 Lessons for all to learn from Hurricane Harvey

After a major hurricane struck the U.S. state of Texas in 2009, authorities proposed to build levees to protect the coast from the Texas-Louisiana border all the way down to Freeport. But work never started and if it does, it would likely not be until 2023.

This is just one way Texas could have mitigated the storm surges generated by Hurricane Harvey, says Glenn McGillivray, managing director of Western University’s Institute for Catastrophic Loss Reduction. Another, he says, would have been to better plan the massive development that occurred in the Houston area.

‘Water simply has no place to go’

“They’ve been building like there’s no tomorrow including building into green lands and wetlands…They sop up water. They help us manage water better. You know, when you pave over these areas, when you put up big box stores with big roofs and these sorts of things water simply has no place to go. It runs off very quickly into rivers and creeks and streams and reservoirs. They soon burst their banks and you have a problem. Really, we’re seeing this in most major cities in North America.”

McGillivray says tougher building codes could also help mitigate the effects of disasters. “Taken all together, what we build, where we build and how we build it is all very important.”

Those who ok building don’t pay for mistakes

He says one of the problems in Canada is that municipal governments make the decisions about their own development and provincial governments are the ones which pay for relief from disasters. “There is a bit of a disconnect there and I think local governments either have to have more skin in the game or the more senior government need more say in where we build things and how we build things.”

‘A great step in the right direction’

McGillivray says the insurance industry needs to be involved, noting that it has only recently begun to offer flood insurance. He says the Canadian government has begun to engage the insurance industry and to set standards for flood mapping.  Also it recently pledged $2 billion for a disaster mitigation and adaptation fund to support “infrastructure required to deal with the effects of a changing climate.”

Says McGillivray: “We’re getting there…It’s a great step in the right direction.”