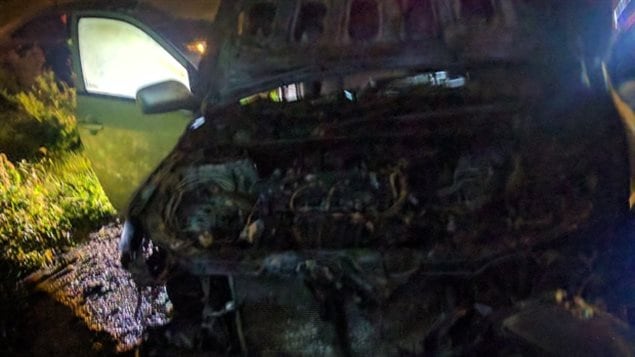 Mohamed Labidi’s car was firebombed in front of his house, in what his mosque called one of a series of hateful crimes.
Photo Credit: submitted to CBC

Many Canadians were mortified to learn that a car belonging to the head of a Quebec City mosque was firebombed on August 6, right outside his home. The mosque is the same one where a gunman opened fire on January 29, killing six worshippers and injuring five others.

No arrests yet for vandalism

The mosque has since been the target of several other acts of vandalism for which there have been no arrests. A man has been charged and will face trial in connection with the shootings.

The torching of the car was initially kept quiet at the request of police who said it was in the interests of the investigation and the family of mosque president Mohamed Labidi.

The incident occurred about 36 hours after the mayor of Quebec City happily announced that a parcel of land would be sold to the Muslim community for the establishment of a cemetery. A previous effort to establish a cemetery in rural Quebec was refused in a referendum held among nearby property owners.

Quebec City police spokesperson Lieut. Jean-Francois Vezina told reporters the car fire is a concern but it is too early to say whether it is a hate crime. No message was left that might have suggested such a thing.

The accumulation of incidents is leaving the Muslim community in Quebec City shaken and many are afraid for their safety. The mayor has expressed worry.

Extremists in his city have put up anti-immigration posters and politician Jean-Francois Lisee has criticized the welcoming of a current flood of migrants crossing into Canada from the U.S. His comments have been denounced by members of his own party. The Globe and Mail reports that the co-leader of another party in Quebec province has issued a statement decrying a “spiral of hate” currently taking place.

The newspaper also ran a column today noting that federal politician Kellie Leitch was side-lined from the shadow cabinet of the opposition Conservative Party. She became notorious in the last federal election for taking several anti-immigrant positions. Among them, she said would-be immigrants should have to take a test on Canadian values and that there should be a snitch line set up for people wishing to report “barbaric cultural practices.”

These incidents reflect the struggle many Canadians face to square their vision of Canada as place that accepts diversity with the acts of those who are less accepting or downright opposed.

With files from CBC, Globe and Mail