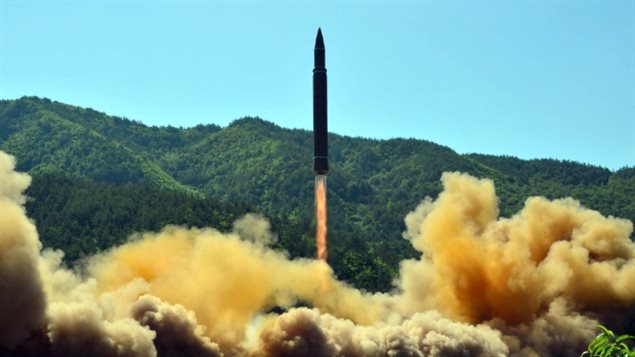 This picture released by North Korea’s official Korean Central News Agency shows the successful test-fire of the intercontinental ballistic missile Hwasong-14. There is concern the country will demonstrate it can hit North America by dropping an unarmed missile on an empty patch of ocean or ground.
Photo Credit: STR/AFP/Getty Images

The world is collectively concerned about the sabre rattling of N, Korea, and the U.S threats of reprisals.

Repeated North Korean missile tests and now the latest nuclear test have only escalated the tensions.

U.S President Trump is also calling on other nations to impose greater sanctions against the Kim Jong Un regime, and has also suggested that the U.S would stop trade with nations that continue to trade with N. Korea.

Charles Burton is a professor of political science at Brock University, and was responsible for relations with North Korea as a former Canadian diplomat in Beijing. He is in St. Catharines, Ontario

The U.S. says it has military options to deal with N. Korea, but seemingly those would involve a “pre-emptive” strike against N.Korean nuclear sites.

Burton, and others, point out that because many of the missiles and weapons are mobile, or deep underground, it would be virtually impossible to eliminate them, and reprisals from the N. Koreans would result. This might take the form of an invasion of S. Korea with likely large scale losses of life.

Also according to a military agreement, if N.Korea is attacked first, China said it would defend its ally.  The result of any military action therefore could be catastrophic.

As for the U.S. suggestion of isolated nations that trade with China, most experts say that is as likely to hurt the U.S. as any other country, such as China.

Leaders around the world are calling for restraint and a diplomatic solution.  He notes that Canada has done little on the international stage, not wanting to push or criticise China to put pressure on N. Korea because of concerns of economic backlash from the Chinese.

Professor Burton who has dealt with N. Korea as a diplomat says that could be difficult as the regime seems to have an extremely narrow world view and understanding of how international dealings work.

He notes that the U.N. would also have to step in with plans to mitigate what would likely be severe repercussions of such a regime change.

A major part of such a plan would be to somehow reach an extremely propagandized society that they would be better off without the Kim regime.