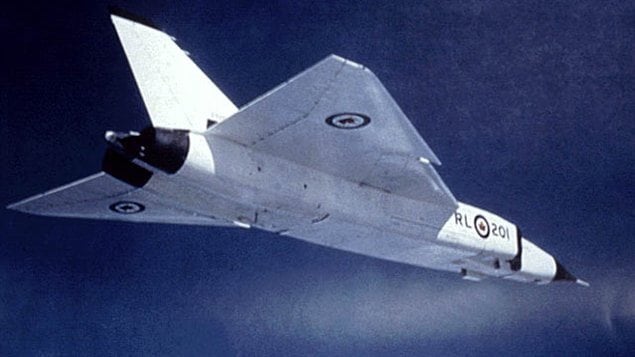 1958: Beautiful and fast, the CF-105 was a technological marvel of its time. To this day, the story of its shocking demise can arouse strong feelings among Canadians.
Photo Credit: Department of National Defence

It has been an ongoing source of often heated debate including allegations of international conspiracies, cover-ups, bureaucratic meddling, a secret flight to a foreign land, and more.

The 1950’s era CF-105 Arrow interceptor by the A.V Roe company was to be Canada’s venture into the space age. Everyone understood it to be the leading edge of fighter jet technology at the time, with promises of even better performance once the new Canadian designed engines were added.

Canadians were shocked when the production programme was suddenly cancelled, but even more so when all completed planes, all blueprints, special tools, and jigs were ordered destroyed as well.

One thing that couldn’t be scrapped were the large test models fired out over Lake Ontario during development.

The 1/8th scale models, about 3 metres long were to test design characteristics during supersonic flight.

At least nine free flight development models  (pushed by subsequently jettisoned booster rockets to between Mach 1.7- Mach 2), were fired out over the lake and they have been something of a holy grail for historians, aviation buffs, and anyone fascinated by the Avro Arrow story, as some of the last remaining vestiges of this amazing technological effort.

There have been previous efforts to find the models, but now this latest effort this summer has finally llocated one of them.

The announcement was made last week to much excitement and media coverage, the biggest news for “Arrow Heads” (as fans are known) since the unveiling of a full-scale (non flying) replica in 2006.

The located model will likely remain on the lake bottom until it can be recovered next spring.

The search effort will continue for the other eight models as weather permits.

It is interesting to note that many of the Canadian innovations of the Arrow design features have been incorporated into other aircraft designs since 1959.

This ranges from the quick replacement engine bay pack, to the dog tooth wing design one can see on the latest F-18E/F Boeing Super Hornet wings, and many others.