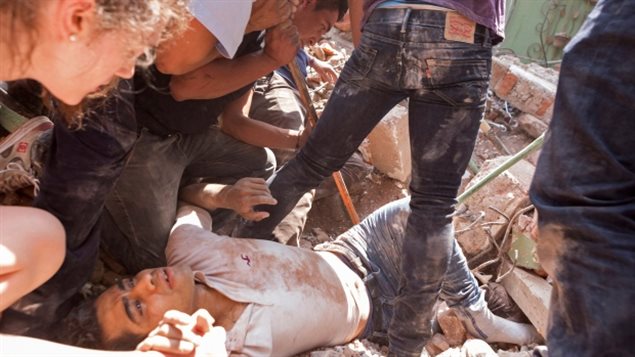 A man is rescued from a collapsed building in the Condesa neighborhood after an earthquake struck Mexico City, killing more than 217 people. Rescue workers continue to pour through rubble for more victims.
Photo Credit: AP Photo / Pablo Ramos

The US Geological Survey has predicted up to 1,000 people could die in the disaster.

There have been no reports of Canadian casualties and the Canadian Embassy in Mexico City has tweeted out an emergency phone number and email for Canadians needing assistance.

The quake was centred near the town of San Juan Raboso, about 120 kilometres southeast of the Mexican capital.

The US Geological Survey predicts an economic impact of between US$1-billion and $10-billion.

Tuesday’s quake came less than two weeks after a magnitude-8.1 earthquake struck off the southern coast of Mexico, killing at least 90 people.

It also came on the 32nd anniversary of a 1985 earthquake that killed thousands of people.