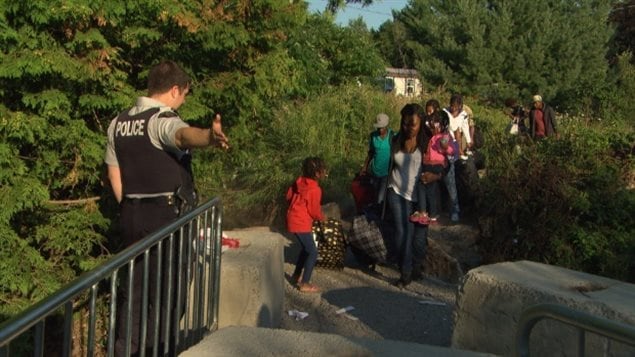 Asylum seekers cross into Quebec earlier this year. Canadian officials believe as many as 40,000 people will be seeking refuge before the end of 2017.
Photo Credit: cbc.ca

Much of the world saw the photos last summer of Haitian people seeking asylum in Canada being “housed” at Montreal’s Olympic Stadium.

The last left last weekend, but Canadian officials are bracing–and preparing–for more claimants between now and the end of the year as the number of those seeking refuge reaches the highest in Canada in over eight years.

New figures released by Immigration, Refugees and Citizenship Canada show that the number of asylum seekers in Canada this year–through August–has reached 27,440 persons, the most since 2009.

Immigration Minister Ahmed Hussen told a conference of immigration organizations in New York on Monday that Canada could see as many as 40,000 claimants by the end of 2017.

Officials say most of the surge is driven by asylum seekers arriving at the Canada-U.S. border, a number that rose to 5,712 in August from 3,134 in July.

This summer, claimants were mainly Haitian citizens living in the U.S., arriving after the government in Washington advised the 58,000 Haitians living and working in the U.S. to return home after it extended the Temporary Protected Status program for just six months.

Just under 12,000 Haitian claimants entered Canada in the province of Quebec.

Officials say the influx could cost Canada’s federal and provincial governments up to about $550 million to process claims and provide services, and more for deportation costs if claimants are rejected.