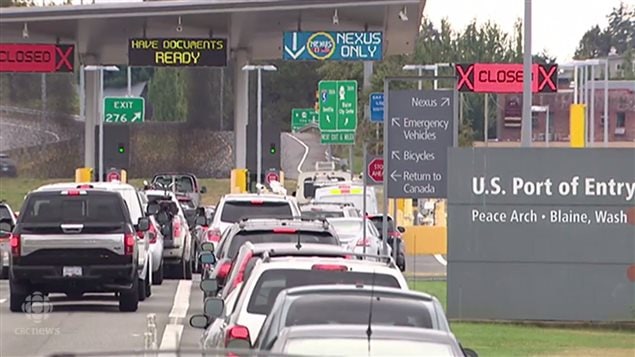 Canada may soon legalise cannabis, and some U.S. states have legalised it, but it’s still considered a federal criminal offence at the U.S border. Answering border agent questions about pot smoking could lead to a delemma with serious repercussions for Canadians.
Photo Credit: CBC

Smoked pot? What happens to travellers at the U.S. border

Canada is about to legalise marijuana for recreational use.   That means that by summer 2018, vast numbers of Canadians will openly smoke cannabis and no longer be involved in a criminal activity.   Many will cross into the U.S on vacation.

Whether for business, or pleasure, what will happen at the border if the agent asks if you’ve smoked pot?

Every day literally thousands of Canadians cross into the U.S, through highway checkpoints, or airports.

Canada is set to legalise recreational use of marijuana by July 1, 2018. Medicinal use and possession is currently allowed through doctor prescription.

Some U.S. states have decriminalised or legalised cannabis.

Under U.S. federal law, smoking or possession are still criminal offences and it’s federal law which controls the borders no matter which state you may be entering.

Mamann says the U.S. law is clear on this. If you admit to having smoked marijuana you will be considered as having admitted to an act which would be criminal in the U.S.

Under the U.S Controlled Substances Act admitting to having smoked weed is considered equal to a conviction.

He says agents have a lot of discretion, some will turn a blind eye, and let you in, others may not.  In the later case you face a lifetime ban and have to ever after apply for costly special permits to enter the U.S.

If you say “no” and they find evidence that you’ve lied, you’re in at least that much trouble if not more.

He says medicinal users are allowed in although he says he hasn’t seen an actual regulation that clearly allows this policy, meaning that it appears to be in somewhat of a legal grey zone.

The U.S. could relax their rules for Canadians once Canada legalises pot, or could just as easily go the other way, start to suspect many more Canadians are smoking pot and start to ask the question of many Canadian travellers putting them in a difficult situation.

Mamann says the situation once Canada legalised cannabis will have to be negotiated with the U.S.