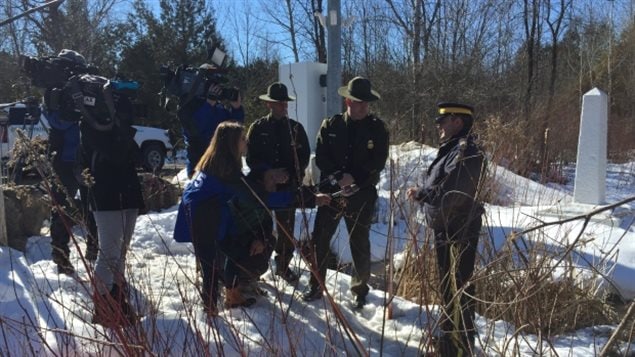 American reporters reached across the border last winter to interview an RCMP officer, right, while U.S. border agents looked on. Figures revealed Thursday the number of asylum seekers to Canada is up by more than 8,000 persons from all of 2016.
Photo Credit: CBC / Jaela Bernstien

Asylum seekers rate is well up from last year

The number of people seeking asylum in Canada continues to climb.

About 13,000 of the asylum seekers entered Canada illegally.

Some 6,000 others received expedited work permits.

The numbers were revealed Thursday at a House of Commons Public Safety Committee briefing by the director general of the operations sector of the Department of Immigration, Refugees and Citizenship, Michael McDonald.

McDonald said 80 staff from the immigration department were reassigned to help with the influx of asylum seekers in Quebec, where 5,500 people crossed the border illegally in August.

Speaking later to reporters in Ottawa, Immigration Minister Ahmed Hussen said the number of irregular border crossers in Quebec appears to be dropping.

He said about 50 people a day crossed into Quebec this month. That’s down from hundreds this summer.

McDonald did not say how many applications have been processed and there were no statistics about how many asylum seekers were turned away for criminality.

He that on average it costs $15,000 to 20,000 for various levels of government to process each asylum seeker.

With files from Global News, Postmedia