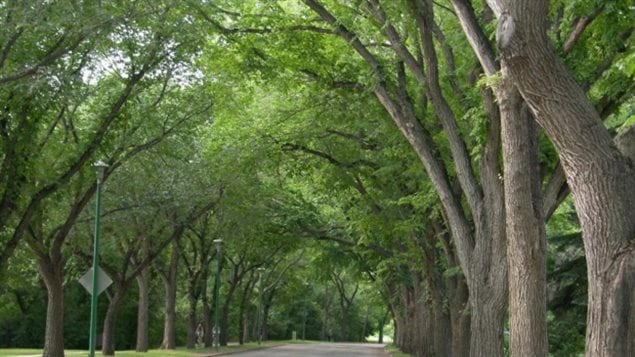 American elm trees are one of the most common trees found along Saskatoon streets, such as this canopy of trees along Spadina Crescent. A new University of New Brunswick study suggests that daily exposure to trees and other greenery can extend your life.
Photo Credit: City of Saskatoon

There are a million reasons to love trees, those perennial plants that rise from the ground, come in all shapes and sizes, whose branches grasp at the sky.

One needs only to settle briefly under one on a peaceful summer day for a reminder of how wonderful life can be.

They can be magical and, now, a new study strongly suggests they can be a whole lot more than balm for emotional wounds or companions on a joyous spree.

Researchers at the University of New Brunswick have unearthed compelling evidence that trees help us live longer and they have some sturdy data to support that premise.

Their study, published in this month’s issue of The Lancet Planetary Health, shows a clear link between green surroundings and the chances of living a longer life, at least for those living in cities across Canada.

While previous studies have shown that exposure to urban green spaces and parks can improve mental health, the UNB researchers say this is the first time a clear link has been shown between green surroundings and a lower risk of premature death.

The researchers also found the positive green effect varied with circumstances–it was greater for middle-aged people than for other age groups, greater for higher-income people and greater for men than women.

The study offered no conclusions on why that was so or why the greenery had the effect it did, measuring only rates of mortality.

Nor, did they estimate how much longer someone might live with regular exposure to green spaces

But the facts, they say, speak for themselves.

Leading the study was Dan Crouse, a Research Associate in the University of New Brunswick’s Department of Sociology and a Epidemiologist at the New Brunswick Institute for Research, Data, and Training.

I spoke with him by phone at his office at the University of New Brunswick on Friday.

I think that I shall never see
A poem lovely as a tree.

A tree whose hungry mouth is prest
Against the sweet earth’s flowing breast;

A tree that looks at God all day,
And lifts her leafy arms to pray;

A tree that may in summer wear
A nest of robins in her hair;

Upon whose bosom snow has lain;
Who intimately lives with rain.

Poems are made by fools like me,
But only God can make a tree.