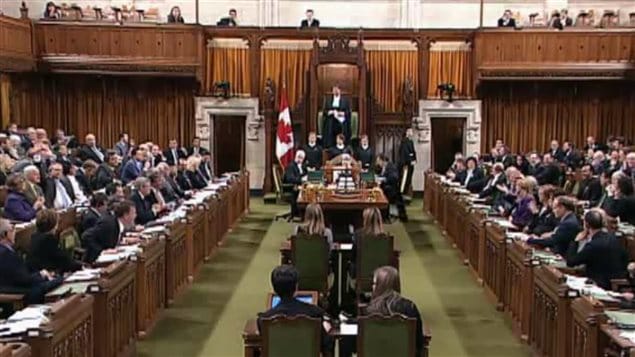 2011: The speaker rises to try to restore order as the parties hoot and yell at each other for a couple of minutes after one member called another * A grumpy old man*.
Photo Credit: via CBC

The unruliness of Members of Parliament

This month a U.S. Senator said he would not seek re-election as he did not want to be a part of the indecorous level of debate in U.S. politics of late.

In Canada’s House of Commons, there has long been calls to reduce the amount of undignified and incivil heckling during Question Period.

Many Members of Parliament have spoken out about heckling. Yet concerns about a lack of decorum in the House persist.  Samara Canada is a non-profit, non-partisan advocacy group promoting greater public participation and education about Canada’s democratic system

The organisation recently surveyed M-Ps to get their perspective on the issue.  Jane Hilderman,  Executive Director of Samara Canada

Samara Canada’s new report is called, “No One is Listening- Incivility in the 42nd Parliament and how to fix it” (link below story)

The House of Commons in Canada, and indeed in Britain from where Canada’s Parliamentary tradition originates, has a long history of disruptive behaviour.

Journalists in the early days of Parliament noted a variety of such acts including bringing firecrackers into the House, throwing paper balls and books at each other and so on. An 1878 report notes one such event,

“While points of order were being argued, Members hammered at desks, blew on tin trumpets, imitated the crowing of cocks, sent up toy-balloons, and occasionally hurled blue-books across the House. Often the babel of sounds was such that neither the Speaker of the House nor the Member who had the floor could be heard. Once in a while amid the din some Member with a good voice would start up the “Marseillaise,” “God save the Queen,” ” à la claire fontaine,” “The Raftsman’s chorus,” or some plantation melody”.

While that kind of behaviour, especially firecrackers, would not be tolerated today, heckling and other noise making still does occur with regularity. Whereas the heckling in the past often took the form of witty and incisive comments designed to disrupt the speaker’s train of thought, often now the heckles are simply noise making and occasional name calling.

In the new survey, Samara notes that of the MP’s responding, (84 of 338) some 53% said heckling was a problem.  Even more feel that the public gets a bad impression of MP’s due to heckling, yet two thirds admit they do it.  Several MP’s said they don’t like to attend sessions due to the heckling which some feel is a form of harassment.

Interestingly, the longer an MP has served, the less they report being affected by heckling. And only a minority feel that heckling serves the purpose of increasing accountabili

One of the suggestions to increase decorum is by having the cameras focus on the hecklers, reducing their “anonymity”.  Another suggestion is the alter seating to place MPs among the opposite party seats, which might reduce temptation to heckler when not surrounded by your own party.

In any case, highlighting the issue, may itself bring about some change as MPs and party leaders realize that the public doesn’t like MPs acting like spoiled children.

CBC:example of heckling in House of Commons