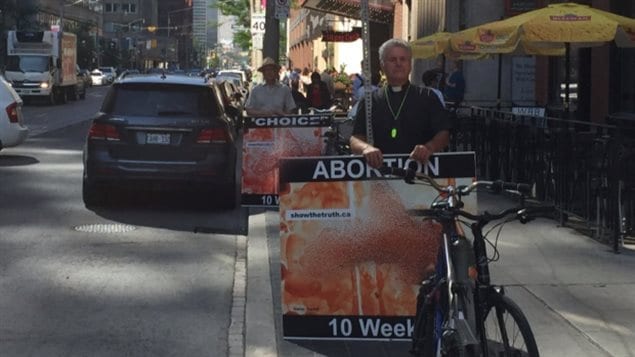 All three major political parties in the province of Ontario have voted together this week to quickly pass a new law regarding anti-abortion protests.

This comes after municipal politicians in Canada’s biggest city, Toronto, had been discussing a ban on the disturbingly graphic signs the protesters use, along with graphic flyers appearing in resident’s mailboxes.

There are eight abortion clinics in the province and the new law will ban anti-abortion protests within 50 metres and up to 150 metres of a clinic. Protesters also cannot attempt to counsel women not to get an abortion in that zone, and cannot attempt to interfere with access to the clinics.

The new law also extends a protective zone of 150 metres around the homes of abortion staff.

In recent times anti-abortionists have taken to showing large blow-ups of graphic photos of aborted fetuses to shock people. They have also been accused of sometimes aggressively engaging passersby. Many people have complained they feel traumatized by the images and harassed and threatened by the protesters.

“We as legislators have passed a very important piece of legislation ensuring that women have safe access to health-care services like reproductive health and abortion services,” he said. “We worked on this bill on a very short time frame to ensure that we protect women”.

The new law creating these ‘”bubble zones” around clinics and staff homes will not come into force immediately as the zones need to be established through local regulation.

Pharmacists who provide the abortion pill, and other health care providers can also apply to have a zone set up for them as well.

Violators of the new law will be liable to a six-month jail term and $5,000 fine for a first offence and  double that for a second offence.