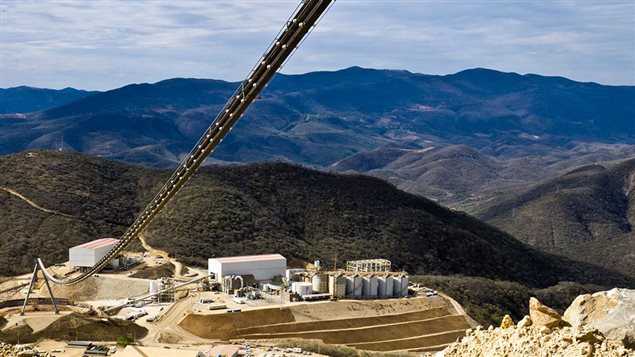 View of the Canadian-operated Media Luna mine in Mexico’s Guerrero state. United Steelworkers union alleges two striking mine workers were killed near the mine in conflict over labour rights.
Photo Credit: Torex Gold

One of the largest Canadian trade unions is calling on the federal government to intervene with Mexican authorities and a Canadian mining company after two people were killed near a Canadian-operated gold mine in the country’s southern Guerrero state on Saturday.

The United Steelworkers (USW) says the murder of two striking workers underscores the widespread repression of basic labour rights in Mexico even as these fundamental rights are a key part of the proposed changes to the North American Free Trade Agreement being renegotiated now.

“On Saturday, November 18 – four days after the Canadian government was warned of the potential for such violence – an armed group murdered two striking workers from the Canadian-owned Media Luna gold mine in the state of Guerrero,” Ken Neumann, the USW’s national director for Canada, said in a statement.

“The root of these brutal murders is the widespread repression of labour rights in Mexico – including by Canadian companies.”

The Media Luna mine is owned by Canada’s Torex Gold Resources.

These “corrupt protection unions” don’t legitimately represent workers and it is common for foreign companies to sign agreements with these unions to prevent workers from joining legitimate unions that will fight for their rights, Rowlinson said.

“These collective agreements are signed without the knowledge of workers at all,” Rowlinson said. “And they are there really to prevent the workers from engaging in collective activity to improve their terms and conditions of employment and being represented by an authentic trade union.”

In early November, workers at the Media Luna mine found out that such a deal had been struck between Torex Gold and CTM and went on strike to demand their right to join the National Union of Mine, Metal, Steel and Allied Workers of the Mexican Republic, also known as Los Mineros, Rowlinson said.

The striking Media Luna miners had set up a peaceful blockade of the mine, he said.

On Nov. 13, the Mexican government sent about 130 armed police officers to try and break up the blockade and secure the mine site.

Concerned about the prospect of violence, USW officials reached out to the federal government and even to Canadian negotiators at the fifth round of NAFTA negotiations in Mexico, asking them to intervene with Mexican authorities, Rowlinson said.

But on the night of Nov. 18, a “group of violent thugs” allegedly affiliated with the CTM attacked the Media Luna strikers at a roadblock the workers had set up near the mine, he said.

The striking workers reported that Mexican authorities briefly detained the attackers, but released them shortly afterwards, according to Los Mineros. The union also alleges that the armed attackers are linked to the same group responsible for the kidnapping and murders of 43 university students in Guerrero state in 2014.

“The Mexican and Canadian governments must intervene to ensure the security of the striking miners at this Canadian-owned mine,” Neumann said. “In view of the violence, the Mexican authorities and the company must immediately recognize Los Mineros as the legitimate bargaining agent and representative of these workers.”

Nothing to do with Torex Gold

Officials at Torex Gold, however, categorically deny that the incident has anything to do with them.

Gabriella Sanchez, vice president of investor relations at the company, said the incident happened in the community of Atzcala, about 15 kilometres away from the Media Luna mine site.

“The two men who were reportedly killed are not company employees,” Sanchez said.

“We believe the victims are a local contractor and his brother. This has nothing to do with the company. We haven’t even been contacted by investigators about it.”

The company also argues that it does not have the authority to change the trade affiliation union of their employees.

“Such changes could only be accomplished through a government sanctioned process that considered the intentions of the majority of unionized employees,” the company said in a press release on Nov. 6.

Officials at Global Affairs Canada could not be reached for comment in time for this publication.