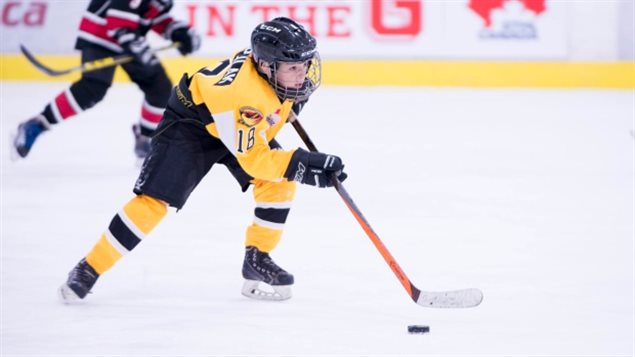 In Canada *Bantam League* ages 11-14 is the first level of hockey in which body checking is allowed. The researchers studied 17 players who had suffered a concussion and compared their still developing brains to those of a non-concussed group.
Photo Credit: Submitted by Erin Riley-via CBC

Effects of concussion: longer than thought in young brains

A child gets hit hard or falls hard while playing a sport, say hockey,

Judged to have suffered a concussion, they’re kept out of play for about three to four weeks after which the effects and “damage” have seemingly healed and no symptoms are evident.

However, a new study shows that the effects and healing may take much longer than previously thought.

Ravi Menon (Ph.D., FCAHS) was a co-author and supervisor of the study. He is a Professor of Medical Biophysics at the Schulich School of Medicine and Dentistry, scientist at the Robarts Research Institute and Principal Investigator, The Brain and Mind Institute at Western University (UWO), in London, Ontario

The study was published in the online journal “Neurology” of the American Academy of Neurology under the title “Multiparametric MRI changes persist beyond recovery in concussed adolescent hockey players?” (open access HERE)

In the study 17 young hockey players aged 11-14 who had suffered a concussion were compared with a non-concussed group.

They underwent advanced MRI testing within 24-72 hours of the concussion, and once again three months later at which point all were reporting no symptoms and had been cleared to play following the Return to Play concussion protocol.

However, by using more detailed magnetic resonance imaging techniques, the researchers found that changes in the young brains were still taking place even thrree months after the original impact.

“What the MRI shows is that there are still changes occurring in the brain even after the clinical tests have returned to normal,”, Ravi Menon, PhD

The study showed that the very long fibre tracks in concussed players were damaged, and noticed “hyper-activity” in some areas suggesting the brain was still trying to heal itself, along with prolonged abnormalities in the white matter of the brain.

Professor Menon notes it is not understood whether the changes seen are more or less normal or whether they indicate something bad happening. He says the what the study shows is that the changes are still taking place long after the concussion and long after it had been thought the effects had ceased.

He also says that while a concussion might generally have no major long term effects on most children, a small percentage do not do as well.

While the long term significance of such concussion damage is not clear, it is known that concussion victims have a greater tendency towards emotional issues later in life, and an increased rate of suicide.

Returning too early to play risks a second concussion compounding damage from the first. The so-called second impact syndrome when the second hit can cause swelling as the brain has not healed from the first impact. In rare cases this can cause permanent damage, even death.

Professor Menon says no-one should panic from the study, and that exercise and play are highly beneficial, as a result of the study, parents might want to err on the side of caution and wait a little longer before sending children with their still developing brains, back out to play sports.