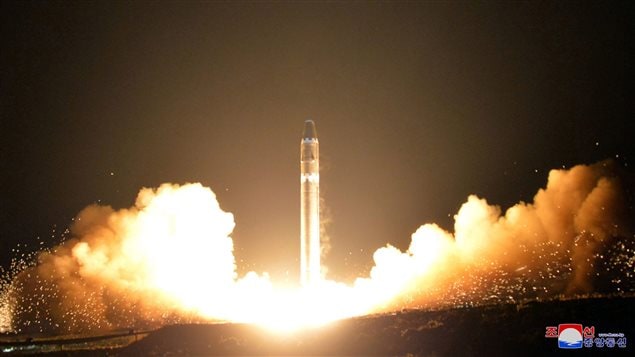 The North Korean Hwasang-15 missile launched on Wednesday flew higher and further than any previous attempt, demonstrating that the Hermit Kingdom may now be capable of hitting Washington D.C. or Ottawa (if it comes to that) with a nuclear warhead.

It also rekindled the debate on whether Canada should cash in its rain cheque and ask Washington for a space under its ballistic missile defence umbrella.

The initiative would have to come from Ottawa, which suddenly felt the chill of Cold War-era anxieties over nuclear war return into the national discourse, said retired Gen. Tom Lawson, who served as Canada’s chief of defence staff under former prime minister Stephen Harper.

The ball is in Ottawa’s court

It’s important to realize that the United States has invited Canada to join its ballistic missile program but for its own reasons Ottawa has turned down the offer, Lawson said.

“My recommendation five years ago, when I was deputy commander of NORAD (North American Aerospace Defence Command), to the government at the time was that we should belong to the missile defence program that we had been invited to join,” Lawson said. “I think it’s generally been the recommendation from every Air Force officer who has been at NORAD.”

(click to listen to the interview with Gen. (Ret.) Tom Lawson)

“I think that first and foremost the Americans would like to simplify the processes around missile defence and make them very much like all of the processes at NORAD regarding aerospace defence,” Lawson said.

Whenever anything unidentified and airborne approaches the North American airspace, NORAD is used, he said.

“It doesn’t matter if that’s an American jet or a Canadian jet, or one or the other have to cross the border, it’s all very-very simple,” Lawson said. “Unfortunately, because Canada has refused to become part of the missile defence, this is not even held within NORAD, it’s held by the U.S. Northern Command.”

“First and foremost it would be manpower that we would provide but then I think there are discussions the Americans would certainly be interested in sharing some of the costs of the systems but it may actually be a very small amount,” Lawson said.

Placing some of the missile defence infrastructure in Canada would make sense militarily but might be unpalatable for political reasons because of the opposition in certain segments of Canadian population and some political circles to the very idea of missile defence, Lawson said.

“I think we all recognize in the military that militarization of space happened long ago, but I think there are sectors of the Canadian populace who believe that has not occurred and Canada shouldn’t be a part of that,” Lawson said.

“I think the United States would recognize Canada’s reluctance to move too far too fast.”

Eventually, if Canada were to join the BMD, the idea of positioning part of the system or at least a defence radar on Canadian soil –  something that has been discussed in the past – could become more palatable, Lawson said.

Furthermore, Lawson also agrees with Rob Huebert, a professor of political science at University of Calgary, who has argued that it would make sense for Canada to place some of the interceptors on its soil to make sure that in case of a multiple-missile attack Ottawa has interceptor missiles in its arsenal that are designated for the protection of Canada.

“It’s a very good point and I think it highlights why the Americans are hesitant to make it a policy to protect Canada and to provide a missile shield for Canada when Canada has explicitly denied and refused any invitations to take part,” Lawson said.

“If there is a salvo incoming into the United States, do they want to be using the limited number of the missile defence missiles that they’ve got for Canada when in fact they may not even have enough to protect the United States.”

The government may also want to think seriously about arming its future warships, the 15 or so Canadian Surface Combatants the government plans to build to replace the current fleet of Halifax-class frigates, with the Aegis Ballistic Missile Defence System, a U.S.-developed platform to provide missile defence against short to intermediate-range ballistic missiles, Lawson said.

“As Canada moves ahead on whatever surface combatants would replace our current frigates, I think it’s absolutely the case that at least the portion of the number of ships we get be equipped with a very good missile radar system, not only to protect the whatever fleet they are with in operations around the world, but also to protect Canadian air space and approaches to Canada and North America,” Lawson said.

“And I think that the Canadian military and the Canadian government recognizes that these systems will be able to be tied network-style into NORAD, NORTHCOM and Canadian Joint Operations Command here in Canada to provide a networked protection against missiles for North America.”

In the meantime, Canada and the rest of the world might want to get used to the idea that North Korea is latest nation to join the exclusive club of nuclear-armed powers along with the U.S., Russia, the U.K., France, China, Israel, India and Pakistan, Lawson said.

“Kim Jong-un is in a position where he has got not only these ballistic missiles but he also got artillery some of which could be nuclear and many of these things are just dozens of kilometres from the border between North and South Korea,” Lawson said. “It’s almost certain that if they tried a decapitation maneuver, using military power, that at least some damage and potentially catastrophic damage can be brought to bear on South Korea.”