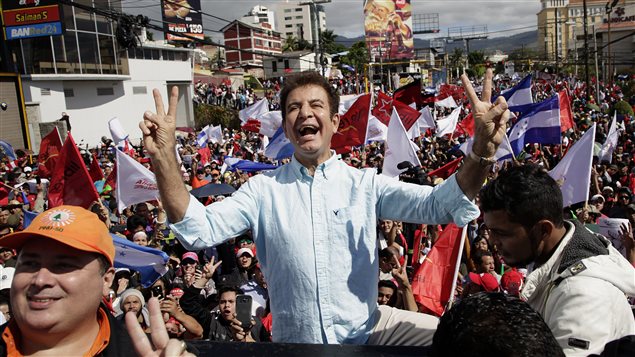 Canada is closely following the crisis that has gripped Honduras following the disputed presidential election and is calling upon the Honduran authorities to reinstate constitutional rights and guarantees without delay, said Foreign Affairs Minister Chrystia Freeland.

“Democratic principles, human rights and the rule of law must be upheld,” Freeland said in a statement as thousands of opposition supporters flooded the streets in the Honduran capital of Tegucigalpa and other cities.

However, Canadian civil society groups are calling on the Trudeau government to take a harder line with the Honduran authorities.

“We call on the Canadian government to stop all political and economic support for the Honduran government until election results can be scrutinized by international observers and declared free and fair, and until the human rights situation in the country improves,” said a statement by Common Frontiers, a working group of Canadian labour and civil rights organizations.

The Americas Policy Group (APG), a regional working group of the Canadian Council for International Co-operation, called on Freeland to support an independent international commission to undertake a vote count and to
conduct an investigation of the electoral process.

Honduras has been plunged into political uncertainty since the November 26 election, with repeated delays and concerns over inconsistencies plaguing the vote.

The crisis has triggered violent protests, prompting the government to declare a state of emergency and dusk-to-dawn curfew.

At least 14 people have died, many from bullet wounds, according to Amnesty International.

“We lament the deaths and injuries that have occurred as a result of violence following the election,” Freeland said in a statement.

“Those responsible must be held accountable,” Freeland added without specifying who Ottawa holds responsible for the violence.

The APG statement called on Freeland to demand the Honduran government to end the state of emergency and carry-out an investigation into the “intellectual authors of the crimes perpetrated by security forces.”

Ottawa’s statement came as Honduras’ electoral tribunal said on Sunday that a partial recount of votes from the disputed presidential election showed broadly the same result as previously, giving the lead to the incumbent, President Juan Orlando Hernandez.

In the partial recount of 4,753 ballot boxes, the conservative Hernandez won 50.1 percent of the votes, against some 31.5 percent for his rival Salvador Nasralla from the center-left coalition Opposition Alliance against the Dictatorship.

However, electoral tribunal president David Matamoros did not specify exactly how many votes from the Nov. 26 election were recounted and offered no explanation on how Hernandez was able to overcome Nasralla’s 5-point lead and squeeze out a narrow victory.

The Supreme Electoral Tribunal had declared Nasralla the leader in an announcement on the morning after the vote, with just over half of the ballot boxes counted. However, it gave no further updates for about 36 hours. Once results then started flowing again, Nasralla’s lead quickly started narrowing, sparking a major outcry.

Nasralla has demanded a full recount and refused to recognize the results, calling them fraudulent. His alliance called for a nationwide strike Monday, including blockades of the country’s main highways.

“The action is due to the fact that we do not accept the results of the elections,” party leader Juan Barahona said.

Nasralla has accused the United States, the European Union and the Organization of American states of being “accomplices to fraud.”

“Canada supports the important work of the Organization of American States (OAS) and EU electoral observer missions in Honduras,” Freeland said. “We welcome the Supreme Electoral Tribunal’s efforts to implement all the recommendations of the OAS Electoral Observation Mission and call upon it to continue until all recommendations are implemented.”

Observers from the EU and the OAS have said numerous irregularities have not allowed them to be certain about the results’ validity.

“We call on the Canadian government to break its silence about repression, corruption and impunity that have been systematic in Honduras since the 2009 coup,” said the statement by Common Frontiers.