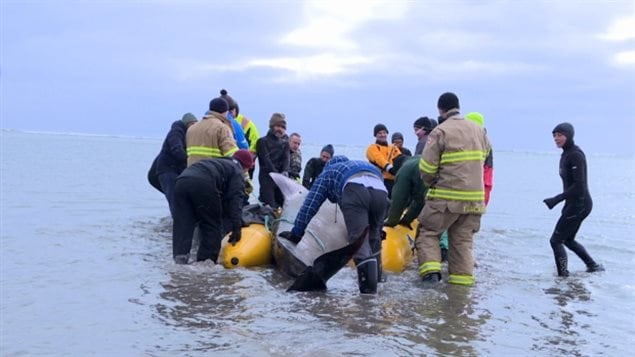 About 100 volunteers turned out to Rainbow Haven Beach east of downtown Dartmouth, N.S., on Monday morning to help rescue a beached pilot whale. Rescuers used an inflatable raft to help get the beached whale out to sea.
Photo Credit: CBC / Carolyn Ray

The tide was moving out so rescuers improvised to free a beached pilot whale grounded ashore Monday morning near Dartmouth, N.S.

As dozens of concerned spectators–including surfers, hikers and fire-fighters looked on–some rescuers poured water on the giant mammal while others shovelled a path to the water at Rainbow Haven Beach in Cow Bay, about 15 km east of downtown Dartmouth.

When the Marine Animal Response Society (MARS) arrived with an inflatable raft and placed it under the whale, things started to look better despite the ebbing tide.

Dozens of volunteers then dragged the stranded whale to the waters of the frigid Atlantic in a matter of seconds.

Despite being stymied by sandbars several times, rescuers managed to guide the whale to a reef and then to open water.

Andrew Reid, the response co-ordinator for MARS, said the whale appeared to be in fairly good health, but he was still concerned.

“It’s unusual for a pilot whale to be by itself. They’re an extremely social species, so when we get single, stranded animals, it’s always a concern that there’s an underlying health issues,” Reid told reports, including the CBC’s Carolyn Ray, at the scene.

“Hopefully, it can re-find its pod, its family and move on.”

In 2017, 16 right whales–already an endangered species–died. Twelve of the deaths came in Canadian waters.

Nine were discovered floating in the Gulf of St. Lawrence. Four others were found beached. (One of the floating whales ended up among the four beached ones.)

Scientists still do not have an exact fix on the cause.

What they do know is that only about 450 of the species remain.