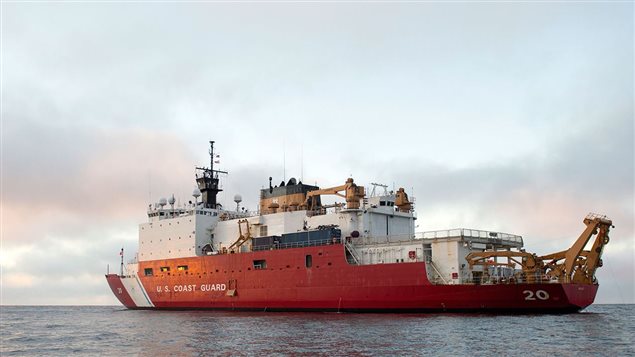 Scientists aboard the icebreaker Healy measured seawater chemistry at scores of locations from the western edge of the Arctic Ocean to the North Pole. The two-month voyage in the summer of 2015 was part of the international GEOTRACES program, which measures trace elements and chemical isotopes in the world’s ocean to understand their biogeochemical cycling and provide a baseline to assess future chemical changes in the oceans.
Photo Credit: (Cory Mendenhall / U.S. Coast Guard)

U.S. scientists have found have found new evidence of significant changes in the chemical and biological composition of the Arctic Ocean that could fundamentally transform the local food chain.

A new study published this week in the journal Science Advances suggests that climate change has caused a dramatic increase in the amount of soils or sediments flowing from the Arctic shore and the shallow continental shelf into the ocean over the last decade.

This in turn causes the waters to churn and draw sediments up from the continental shelf into the water column, delivering more nutrients, carbon, and other chemicals into the Arctic Ocean.

Diminishing sea ice near the Arctic coast leaves more open water near the coast for winds to create waves. The increased wave action reaches down and stirs up sediments on shallow continental shelves, releasing radium and other chemicals that are carried up to the surface and swept away into the open ocean by currents such as the Transpolar Drift. A new study found surprising evidence that climate change is rapidly causing coastal changes in the Arctic that could have significant impacts on Arctic food webs and animal populations. (Natalie Renier, Woods Hole Oceanographic Institution)

These chemicals and nutrients have the potential of fueling the growth of plankton at the bottom of the food chain, which could have significant impacts on fish and marine mammals and change the Arctic ecosystem, said Lauren Kipp, a graduate student at the MIT-WHOI Joint Program in Oceanography and the lead researcher.

(click to listen to the full interview with Lauren Kipp)

“Just like humans need iron to transport oxygen in our blood, the tiny phytoplankton that live on the surface of the ocean need metals to make their enzymes work and for their metabolisms,” Kipp said.

“So if there is an increase in these nutrients and trace metals, it might cause a shift in the species that are best suited to live on the surface.”

“I don’t think we can necessarily say whether these changes are good or bad but rather, based on our data, just that there are these changes occurring and future studies should investigate how this might affect the biology in the region,” Kipp said.

Researchers were able to track the changes in the ocean chemistry by tracing radium-228, a naturally occurring radioactive isotope that is produced in sediments and is soluble in sea water, Kipp said.

“When we see high levels of radium in the ocean it tells us that the water was recently in contact with the coast and in this way radium is a tracer of shelf inputs into the ocean,” Kipp said in a phone interview with Radio Canada International from Cape Cod, Massachusetts.

Kipp led efforts to measure radium levels at 69 locations from the western edge of the Arctic Ocean to the Pole on a two-month voyage aboard the U.S. Coast Guard icebreaker Healy in the summer of 2015.

The cruise was part of the international GEOTRACES program, which aims to measure chemical tracers in the world’s ocean to understand ocean circulation and provide a baseline to assess future chemical changes in the oceans, Kipp said.

“In this study we were interested in investigating where the shelf influence was the strongest in the Arctic Ocean and comparing levels of radium we measured in 2015 to those measured during historical expeditions in the Arctic,” Kipp said.

“And we were surprised to find that levels of radium in the Central Arctic, near the North Pole, were almost double of what they were when they were last measured in 2007.” 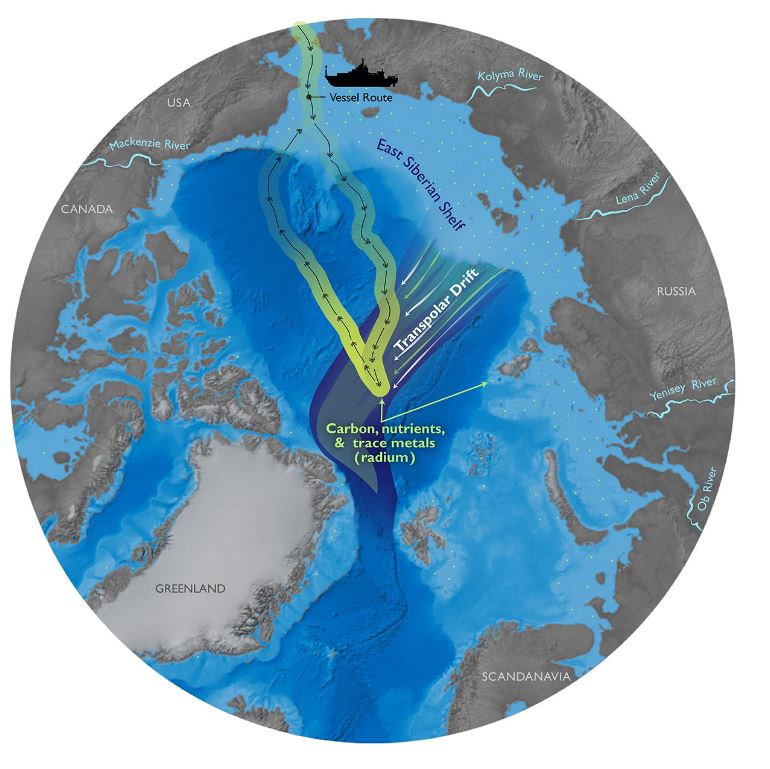 Scientists aboard the icebreaker Healy measured seawater chemistry across the Arctic Ocean and found that levels of radium-228 have almost doubled over the last decade in the middle of the ocean. The radium was transported from land and shallow continental shelves by currents such as the Transpolar Drift.

Because radium comes from the shelf this indicated that there has been an increase in shelf inputs into the Central Arctic Ocean over the last decade, she said.

Researchers concluded that the excess radium had to have come from sediments in the relatively shallow East Siberian Arctic Shelf off Russia’s coast.

“We think that the loss of sea ice over the shelf is allowing for more wind-driven mixing to occur so it’s stirring up the water column,” Kipp said. “And radium has a sediment source, so this mixing is bringing radium from the sediment up into the water column where it can then be transported in the Transpolar Drift out into the Central Arctic.”

There could be other possible factors, such as coastal erosion and permafrost thawing that are amplifying the levels of carbon, nutrients and trace metals released into the ocean, Kipp said.

“In reality, it’s probably a combination of these things but we think the biggest change is this wind-driven mixing,” Kipp said.