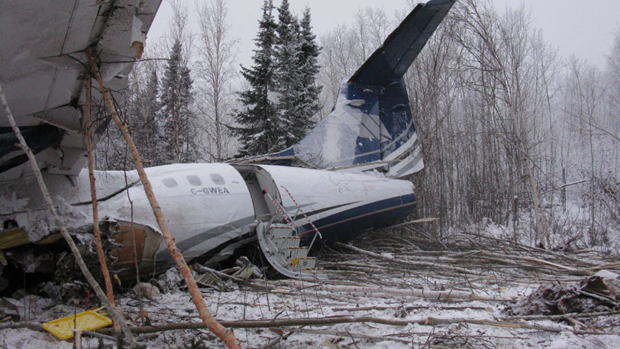 In one of the aviation incidents in 2017, a plane crashed in Fond-du-lac, Saskatchewan killing one person. (Transportation Safety Board of Canada)

The government’s Transportation Safety Board reports a rise in the number of incidents involving Canadian aircraft which in 2017, jumped almost 10 per to 921 from 833 in 2016. That is 25 per cent higher than the five-year average.

“These data, especially the sharp increase in incidents, tell me a major accident is coming,” said Greg McConnell, national chair of the Canadian Federal Pilots Association in a news release. “Transport Canada’s cuts to aviation safety oversight may be largely invisible to most Canadians but they are having an impact that is increasingly apparent and worrying.”

The news release goes on to say that Transport Canada’s “systematic dismantling of aviation safety oversight has accelerated in recent years to budget shortfalls.” For example it says the safety regulator handed off checking the skills and competencies of commercial pilots to the airline and that airports will no longer be subject to full safety assessments.

The release mentions the case of Air Canada f light 759 which on July 7th, 2017 came very close to crashing into four full jets on the ground in San Francisco. It also mentions a case a few weeks ago, when an Air Canada Rouge jet almost slammed into a mountain on approach to Huatulco, Mexico.