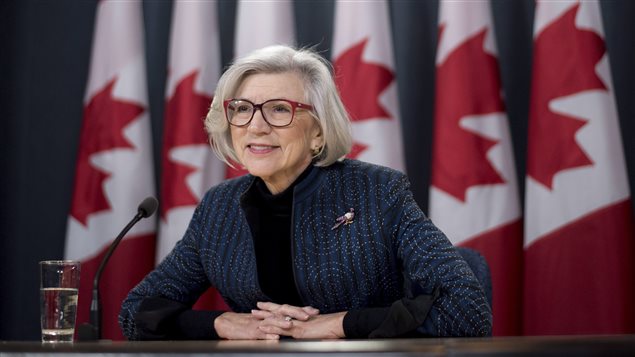 Outgoing Chief Justice of the Supreme Court of Canada Beverley McLachlin listens to a question during a news conference on her retirement, in Ottawa on Friday, Dec. 15, 2017. (Justin Tang/THE CANADIAN PRESS)

Retirement it seems is not for Beverley McLachlin.

First we found out that barely a month after she retired from Canada’s highest court in December, the former Supreme Court chief justice launched into a literary career with her debut crime fiction novel Full Disclosure.

And now we’re learning that after a 28-year pioneering tenure, including almost 18 years as Canada’s first female chief justice, McLachlin has been recruited to help Hong Kong’s top court deal with its heavy case load.

McLachlin, 74, will sit as a non-permanent common-law judge on the Court of Final Appeal.

McLachlin’s candidacy has already been approved by Hong Kong’s Chief Executive Carrie Lam, but she will take up her new role once her appointment is endorsed by the Legislative Council, Hong Kong’s legislature.

The Court of Final Appeal routinely invites judges from other common law jurisdictions to be non-permanent members and has included judges from the United Kingdom, Australia and New Zealand over the years, however McLachlin will become the first Canadian chief justice to serve on the court bench.

The court was established in July 1997, replacing the Judicial Committee of the Privy Council in London as the highest appellate court in the former British colony, now a special administrative region of China.

McLachlin will be joined on the bench by Baroness Brenda Hale, the first woman to sit as president of the U.K.’s Supreme Court.

“The appointment of Baroness Hale and Ms McLachlin to the Hong Kong Court of Final Appeal will increase the number of non-permanent judges from other common law jurisdictions from 12 to 14 and will provide greater flexibility for dealing with the caseload of the Court of Final Appeal,” the top court said in a press release Wednesday.

In the meantime, McLachlin’s 352-page thriller set in the gritty streets of Vancouver is expected to hit the bookstores on May 1, publishing house Simon & Schuster Canada announced in January.