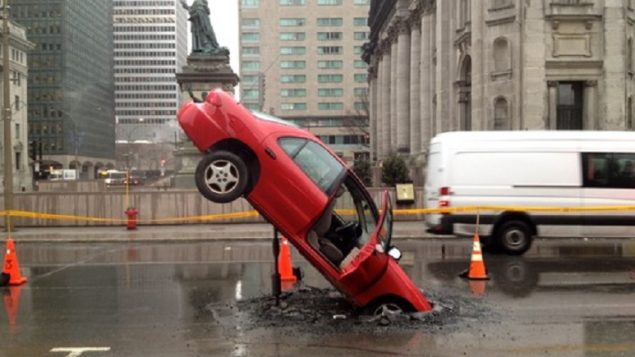 Giant Montreal pothole? Not quite, rather part of a 2012 campaign by the TAXI publicity agency to point out potholes across Canada.. Photo via Radio-Canada

A new way to pave the road to the future

A friend of mine just spent $400 to repair suspension damage caused by driving on Montreal’s many potholed and cracked roads.

The roads in this major city are generally in bad shape and its almost always blamed on the weather as if Montreal, or elsewhere had unique conditions not experienced in other regions of the world.  But road surfaces everywhere eventually break up.
Typical Montreal roads (YouTube by Stiri-2015)

But it’s not the weather, and not really the quality of asphalt, but according to an engineer, it’s the method of paving.

Abd El Halim (Ph.D., F.C.S.C.E., F.C.A.E., P.Eng.) is a professor in the Department of Civil and Environmental Engineering and director of Infrastructure Protection and International Security at Carleton University in Ottawa

Professor Halim has invented a new method of paving that seems to at least double the surface life streets and highways, if not longer. 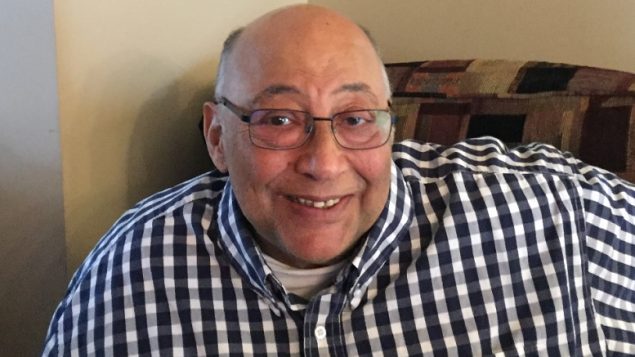 He says in the past 100 years or so of macadam road paving, various mixtures have been tried and procedures but the one thing that hasn’t changed is the compacting method.

He has invented a new method using large long rubber tracks instead of the typical steel rollers and vibro-compactors. 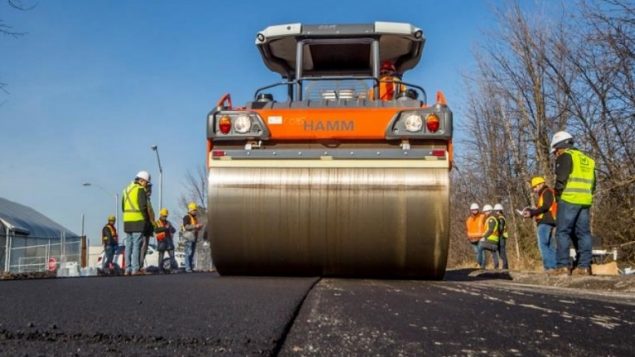 His technology is called AMIR-which is the name of his son, but conveniently also describes his design, the Asphalt Multi-Integrated Roller

He says that the typical heavy steel rollers are applying a lot of pressure on a small contact area as they roll over the freshly laid hot mix asphalt (HMA), basically quickly crushing the mix as it passes then the surface rebounds slightly after the pass, creating tiny cracks as it re-expands slightly.

His AMIR method uses wide and long rubber belts which exert equal pressure over a vastly increased surface area and for a longer duration as the machine passes. 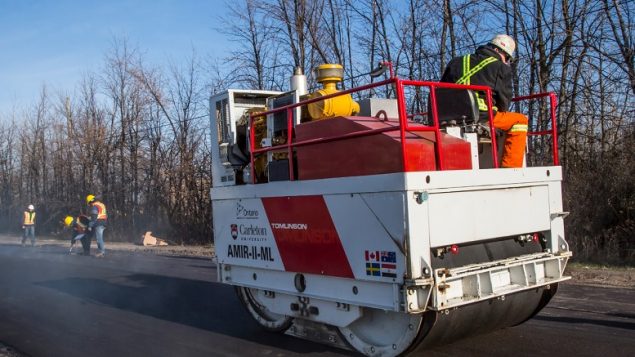 The AMIR-2 machine, showing wide belt which passes under the length of the machine. Amir-2 is very similar to the original Amir-1 which proved to be difficult to negotiate curves. Photo- supplied

It’s roughly equivalent to a hammer blow (i.e steel roller) versus the same energy but created over a longer duration as a strong steady pressure (his rubber belt).

He often uses another analogy of taking an egg (the HMA) and holding it upright on a softer surface like a sponge (eg road bed). Taking the flat side of your steel kitchen knife, tap the egg using enough force until it cracks. Then he says, take another egg and using the same force, tap the egg with your fingertip and you won’t be able to crack it. 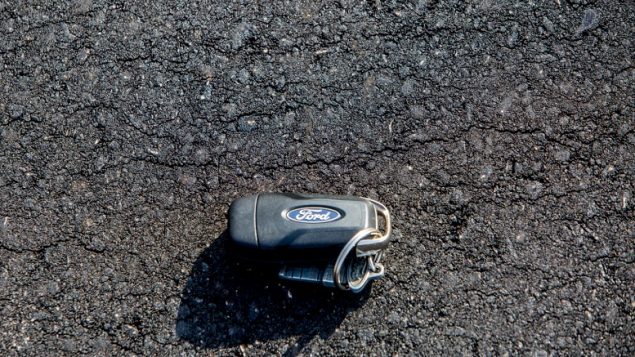 He came to the idea after a lab experiment which invented a very long lasting asphalt surface involving a plastic mesh. In the lab it worked very well, but he said when they tried it in a real-life project, the moment the rollers passed over, the same type of cracks appeared. This led him to think it wasn’t the asphalt mix, or new technology, but the effect of the steel rolling equipment. 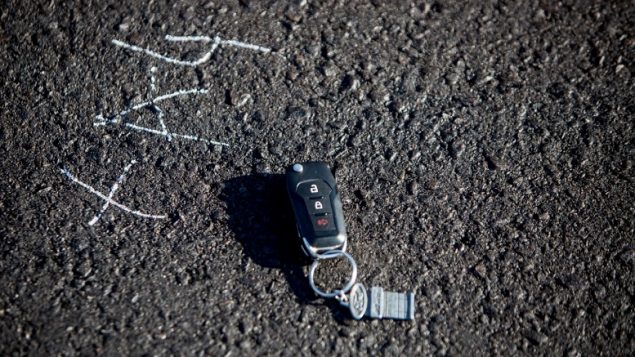 AMIR surface showing uniformity with no cracks to allow water to penetrate or any other undue stress to further degrade the macadam whether from other environmental factors (such as extreme heat climate, or heavy vehicles to aggravate existing cracks). Photo-supplied

He says in climates like Canada, the cracks allow water to penetrate which then freezes widening the crack which lets in more water and the cycle is repeated until the surface breaks, aided by the pounding of passing cars and trucks.

Elsewhere in the world the cracks are the same although the process of breaking up the surface may be different, such as conditions of extreme heat and cooling. 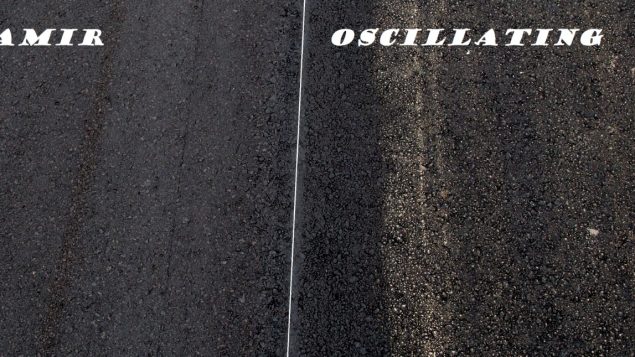 He invented the technology decades ago, and though he won many awards for the concept, he came up against two hurdles.

Some huge paving equipment manufacturers wanted to buy the technology, but only to keep it off the market so as to not render their equipment lines obsolete. Contractors also were not entirely enthusiastic about a technology that would extend the life of roads and reduce the need for maintenance and repaving contracts.

And almost at the same time other investors thought it might not even be needed as then U.S. President Reagan had allocated hundreds of millions of dollars in the development of new formulas for something to be known as “super-pave”.

That eventually turned out to be of no real advantage.  However, many years had passed, and Halim had moved on. 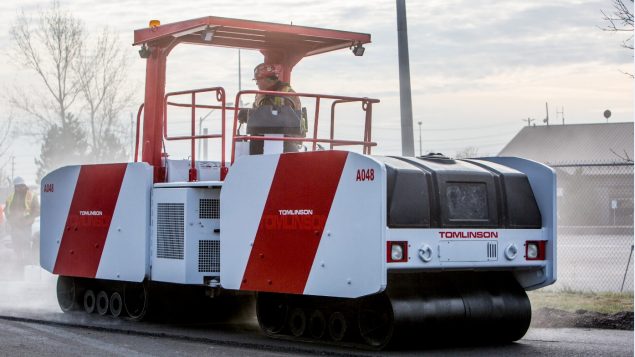 Then at a major technical conference in 2010 people asked again about his AMIR rollers as nothing else really seemed to offer service-life improvement.  With interest from an Ontario government engineer a test was done in 2012 on a stretch of test road for the Ministry of Transport (MTO).

That has held up very well showing no damage after several years, while at the same time the traditional road needed repair.

The MTO estimate that roads which lasted even just one year longer would save $50 million annually. 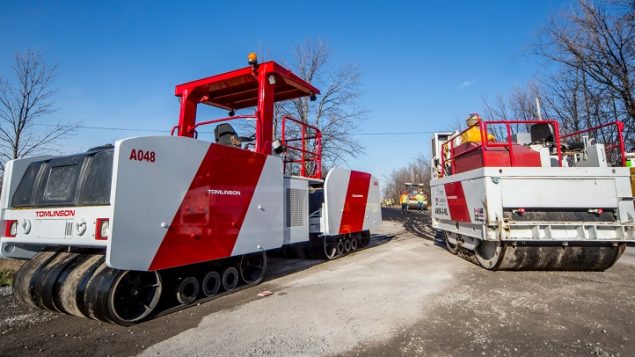 One of the additional hurdles was the cost of new AMIR equipment which would replace a contractor’s existing machines. To solve that Halim worked with a company called Tomlinson to develop both new machines, but also AMIR kits that could retrofit to existing types of machines to greatly reduce costs.

The Ministry of Transport in Ontario is set to adopt the technology to repave a larger test section of road in that province.