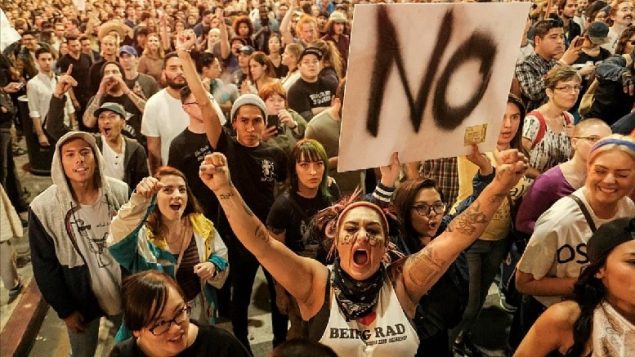 A world divided, a new international survey shows 3 out of four people in countries around the world say their county and society has become divided. Photo: RINGO CHIU-AFP-Getty Images

A World Divided, or so it seems according to an international poll

It seems a majority of people in countries around the world think their country and societies are more divided than ever.

A new international survey for the BBC by the polling firm Ipsos-MORI asked people in 27 countries about opinions on divisions in their countries and the reasons. In all, 19,428 people were surveyed in February of this year

In total, fully three-quarters of those asked (76% average) felt that society in their country was divided.

People in Serbia almost all felt the division with 93 percent saying the country was diveded. Only 34 percent of Saudi Arabians felt that division. Canada was among those lower down on the list, although a majority 62 per cent felt the country divided.

Qualifying that response by asking about societal division now compared to ten years ago, European countries which have seen waves of migrants, are at the top

Some 51 per cent of Canadians said the country was more divided than a decade ago, while 16 per cent felt there was less division.

Why? Reasons for division

As to what is causing societal rifts, politics topped the list with 44 per cent saying differing political views are dividing their country. 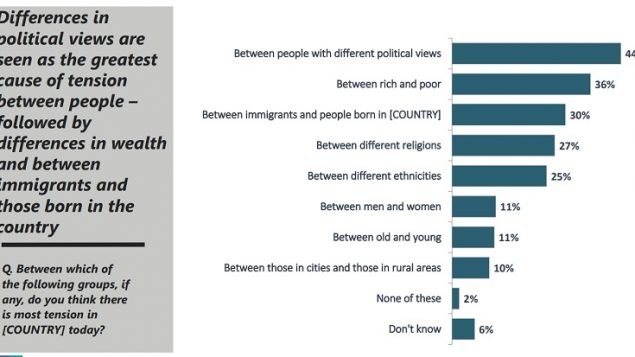 Again however breaking down issues in each country, the greatest tension in Canada was said to be between immigrants and native born (40%). The second source of division was listed as being between different religions (36%) and third was the economic difference between rich and poof (31%)

Swededn which has seen a substantial arrival of migrants, showed the tension between newcomers and native born also as the top issue (49%) with related issues of differences between ethnicity and religion as the second and third sources of division ( 37%, 32%)

Germany, France and the UK have also listed tensions between immigrants and native born as the top source of division.

China and Russia both listed division between rich and poor as the top source of division (65% each).

Countries like Malaysia, Turkey, Argentia, Korea, and Serbia listed politics as the main source of division

On a somewhat different question, that of trusting people, only China and Sweden showed a majority of respondents felt people could be trusted  (61%, 60%)

In all the rest of the countries, the majority felt the need to be careful when dealing with people.

Interestingly, when asked “To what extent do you agree or disagree that people across the world have more things in common that things that make them different”, some 65 per cent of all the respondents agreed with Russia and Serbia topping the list and Japan at the bottom.