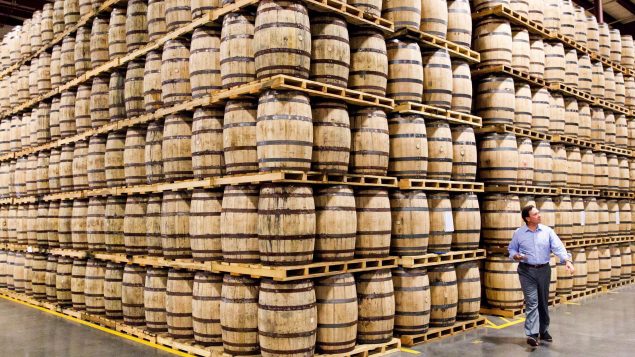 FILE - In this Aug. 14, 2014 file photo, a Diageo employee walks by barrels of whiskey stored in a new warehouse at the George Dickel distillery near Tullahoma, Tenn. Producers of Kentucky bourbon and Tennessee whiskey will be hit by a 10-per-cent Canadian duty in retaliation for U.S. duties on Canadian steel and aluminum imposed by the U.S. government. (Erik Schelzig/AP Photo/File)

From ball pens to bourbon: A look at Canada’s strategic tariff retaliation strategy

At first sight the list of American products targeted by Canadian retaliatory tariffs that will come into effect on July 1 seems rather eclectic.

But there is a clear logic behind the targeting of Hershey chocolate bars from Pennsylvania, orange juice from Florida and bourbon from Kentucky, experts say. 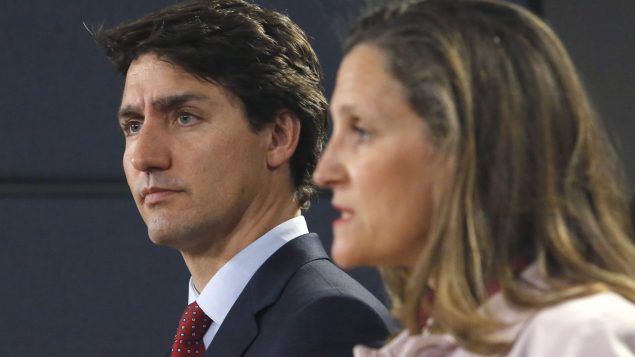 Prime Minister Justin Trudeau and Foreign Affairs Minister Chrystia Freeland speak at a press conference in Ottawa on Thursday, May 31, 2018. Canada is imposing dollar-for-dollar tariff “countermeasures” on up to $16.6 billion worth of U.S. imports in response to the American decision to make good on its threat of similar tariffs against Canadian-made steel and aluminum. (Patrick Doyle/THE CANADIAN PRESS)

“We are imposing dollar-for-dollar tariffs for every dollar levied against Canadians by the United States,” Freeland said.

They will remain in place until the United States eliminates its trade-restrictive measures against Canada, Freeland said.

Republican Senate Majority Leader Mitch McConnell, who represents the state of Kentucky, is likely to get an earful from whiskey producers in the state now that their product will be 10 per cent more expensive for Canadian buyers.

The same is true for Paul Ryan, the Republican Speaker of the U.S. House of Representatives. He represents a district in Wisconsin where there is significant cucumber growing industry.

Maple syrup producers in Vermont are likely to put pressure on Democratic Senator Bernie Sanders now that their product will be 10 per cent more expensive as well.