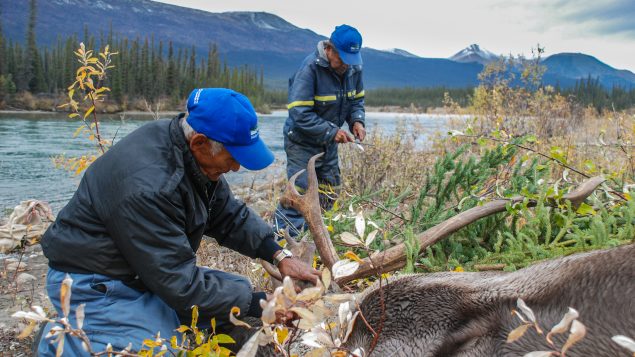 Two hunters work on a caribou in Canada's Northwest Territories. A cookbook featuring the recipes and food traditions of Arctic peoples recently won an international award. The authors hope it shines a light on the value of Indigenous knowledge. (Jean Polfus/EALLU –Food, Knowledge and How We Have Thrived on the Margins)

A book showcasing the recipes of  Indigenous peoples from across the Arctic took the day at the Gourmand International Cookbook Awards in Yantai, China.

EALLU –Food, Knowledge and How We Have Thrived on the Margins won in the Best Food Book of the Year category, beating out 15 other finalists from places like Canada, the U.S., Japan, Germany, Colombia, China and South Africa.

“I got tears in my eyes,”  Maret Ravdna Buljo, a Sami reindeer herder and one of the book’s contributors, told  Eye on the Arctic in a telephone interview from her home in Norway’s Lofoten Islands this week. “When we made this I never thought we’d be going to the Gourmand awards with it. I am very happy and grateful also for that.”

Entries for this year’s awards came from 215 regions around the world. 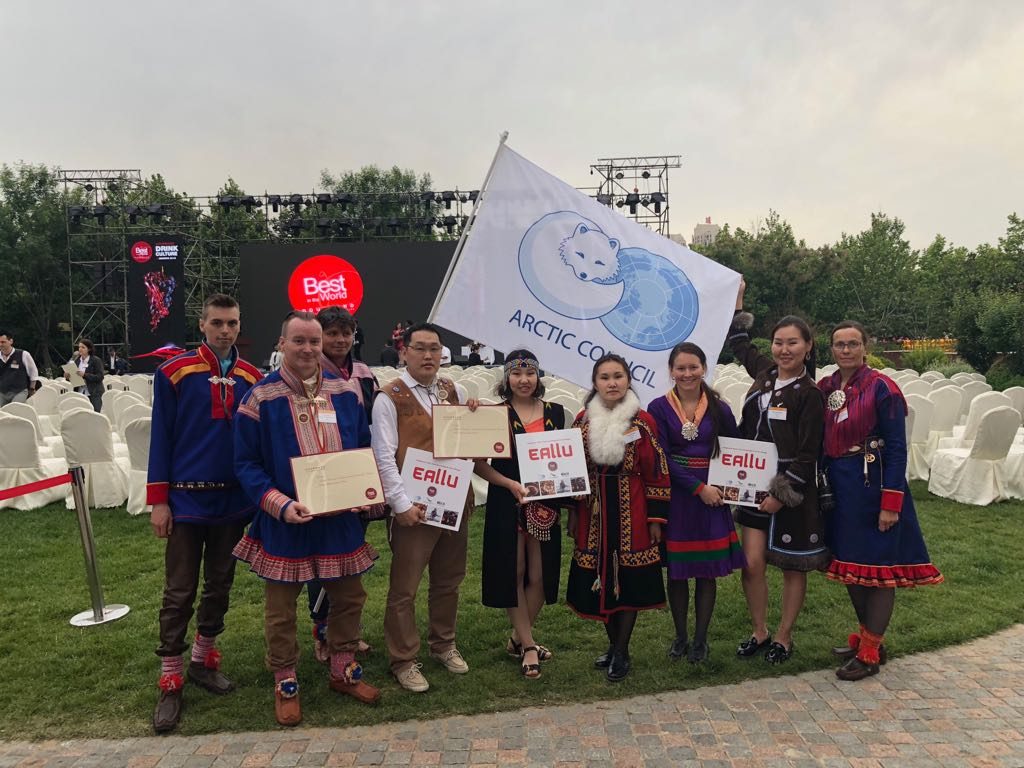 Over 50 authors from the Arctic and sub-Arctic contributed to the winning cookbook. The award was given out on May 26 in Yantai, China. (Courtesy International Centre for Reindeer Husbandry)

“To receive such an award from the mainstream food publishing industry is a powerful recognition of the richness and depth of a focal point of our cultures, our relationship to food,” said Mikhail Pogodaev from the Association of World Reindeer Herders in Yakutsk, Russia and one of the book’s project leaders.

“This is much more than just a book of recipes,” he said in a news release.  “This is about Arctic Indigenous peoples´ deep knowledge about food, raw materials, processing and conservation, food security, health and wellbeing – It’s about our food traditions, our traditional nomadic lifestyles, our local economies, our philosophy and our worldviews.”

Listen to our Eye on the Arctic conversation with reindeer herder and cookbook contributor Maret Ravdna Buljo, for more on Sami cooking and Indigenous food culture can serve as a bulwark against climate change and industrial development in the Arctic:

From stomach soup and reindeer yoghurt, to caribou stew and bearded seal

The book is split into sections examining the plants, animals and recipes that different Arctic Indigenous peoples rely on. It includes maps,  photos and notes from the recipe authors, as well as sections on food culture, customs and beliefs.

The recipes include everything from ones found in Arctic Canada, like nilii gaih (dry meat), made by the Gwich’in,  and caribou meat gravy made by Inuit, to Saami techniques for smoking reindeer and a detailed explanations of the seaweed and plants used by the Yup’ik and Chukchi people of Siberian Russia. 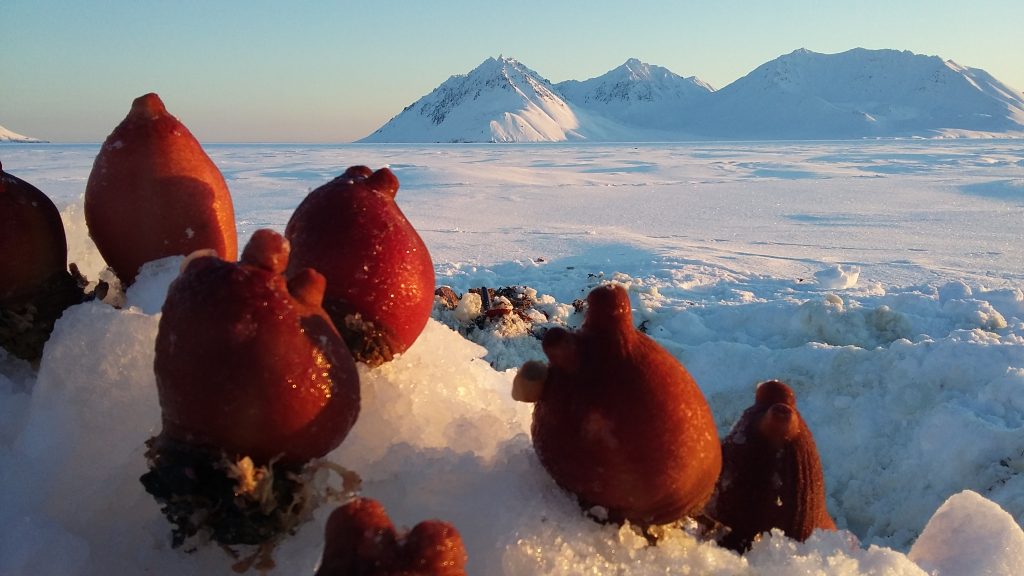 Sea squirts pictured in the Russian Arctic. The Chukchi eat them raw, boiled and frozen. The sea squirt, also known as upa, is also used for medicinal purposes. (Elena Kaminskaya/EALLU –Food, Knowledge and How We Have Thrived on the Margins)

“It gives us more  motivation to work on this topic,” Sara told Eye on the Arctic from her home in Norway. “It’s a very big part of our daily lives and we really see it’s important to document and maintain the way our ancestors have been living for generations.

“It’s of great value and importance for us, and also of the rest of the world.” 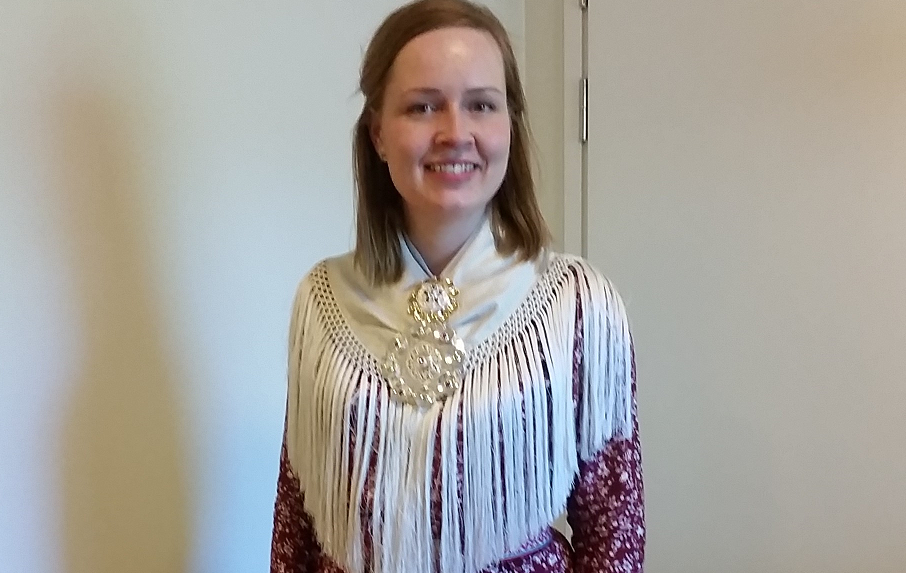 For more on Indigenous food culture and what reindeer can teach the world about sustainability in the North, listen to Eye on the Arctic‘s conversation with Ravdna Biret
Marja Eira Sara:

“Maybe this signals a shift in how mainstream society values our food knowledge and that our societies can leverage this recognition to better community physical, mental and economic health,” said Anders Oskal, Secretary General of the Association of World Reindeer Herders,  and the EALLU project leader, after the prize was announced.

“For instance, the traditions of all reindeer herding peoples to utilize everything from the reindeer remains strong, and is something the world could learn from as the needs
to change the global food system has become increasingly apparent.” 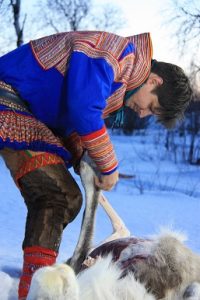 Sami herder Issat Turi slaughters a reindeer. The EALLU authors spotlight how and why every part of the animal is used by Arctic Indigenous peoples. (Andreas Ausland/EALLU –Food, Knowledge and How We Have Thrived on the Margins)

‘Ancient knowledge enacted in the everyday’

The cookbook was initiated and led by the Association of World Reindeer Herders, a circumpolar NGO.

The team behind the project says they hope the international award can help reframe how people perceive Indigenous knowledge and the contributions it can make to the world.

“This is not ‘Traditional Knowledge’ constructed in the form of a declaration or political statement. This is ancient knowledge enacted in the everyday,” say the editors and authors in the book’s introduction.

“We are thrilled that the hard work of our over 50 authors from across the Arctic and sub Arctic has been rewarded with such a prestigious award,” said Philip Burgess from the International Centre for Reindeer Husbandry and also the book’s Editor in Chief.

“Our hope is that this award will kickstart a community led revolution in how Indigenous food knowledge is used and valued.”

Denmark/Greenland: Researchers must be honest with Arctic peoples about food contaminants says doctor, Eye on the Arctic

Norway:  Looking for ‘the gold of the Arctic’? Meet the cloudberry, The Independent Barents Observer