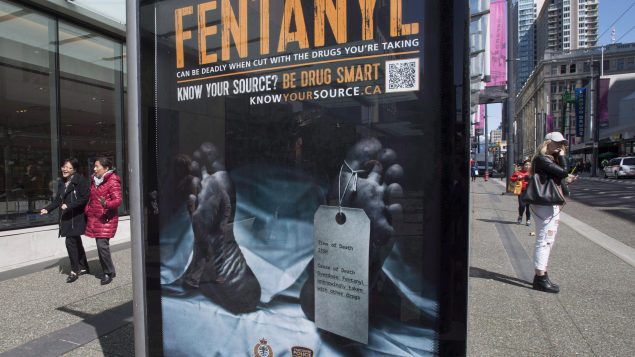 In spite of advertising warning Canadians of the dangers of using opioids like fentanyl, the number of overdose deaths increased dramatically in 2017. (Jonathan Hayward/The Canadian Press/file)

The government of Canada will severely restrict the marketing of prescription opioids to doctors after nearly 4,000 Canadians died in 2017 of overdose linked to this class of drugs. That was an increase from about 3,000 in 2016. The most likely victims were men aged 30-39 and most often, fentanyl was involved.

Canadians have been shocked to learn that ordinary people, including a middle class couple, have died from the recreational use of street drugs in their own homes.

“This is unlike any other public health crisis we have experienced in recent years,” said Canada’s chief public health officer in a news release.

The minister of health announced a series of measures that will “severely restrict most forms of prescription opioid marketing” by industry. The news release states that “marketing can unduly influence health professionals, leading to over-prescription of opioids and further contributing to Canada’s opioid crisis.”

The government has launched public consultations on how to restrict marketing and until new regulations are in place it wants opioid manufacturers to voluntarily stop marketing activities associated with opioids.

The new restrictions could involve fines and criminal charges.

British Columbia is the provinces hardest hit by the opioid crisis and recorded 974 deaths in 2017. The province of Ontario recorded 1,125 opioid related deaths.