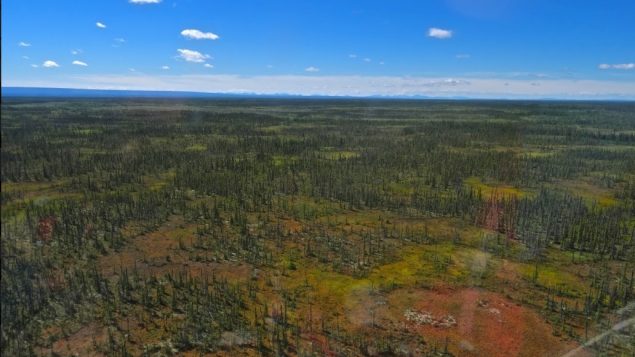 An example of the northern boreal forest. The treed areas are those which still have permafrost and those that are moss covered have lost permafrost. (C Gibson)

Many studies have shown that the huge permafrost layers under the Arctic are melting.

A newly published study shows that the permafrost in northern regions in the boreal forest may be melting much faster than previously thought, up to 25 per cent faster, due to wildfires. This means current models of permafrost thawing and CO2 release are underestimating the situation.

The finding of the research were published in the August 2, 2018 edition of Nature Communications under the title, Wildfire as a major driver of recent permafrost thaw in boreal peatlands” ( open access HERE) 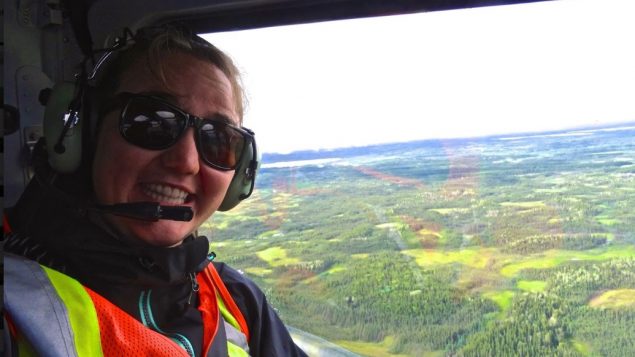 Carolyn Gibson en route to a site northeast of Fort Simpson, Northwest Territories to visit the site of a 1995 fire (suppllied

Across the northern reaches of the boreal forest vast patches of permafrost several metres thick, lies under a relatively thin layer of soil. That soil supports bushes, grasses, lichens, and small trees.

What the study found was that when a wildfire races through and burns that off, the blackened ground is exposed and absorbs much more heat from the sun.

That heat is absorbed downward, melting the supporting permafrost. 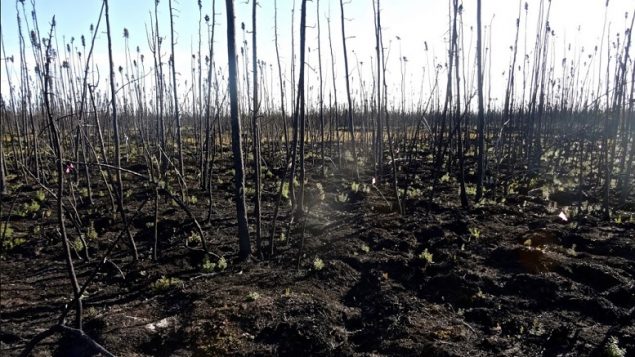 An example of burned area around Kakisa, NWT, from the 2014 fire year. This black surface will absorb a lot of energy that will be conducted down to the permafrost layer and cause the thaw to accelerate. ( C Gibson)

In addition to making the ground soft and soggy creating travelling problems for large animals and people, and damage to infrastructure such as roads in those regions, permafrost contains vast resources of trapped CO2 which is then released into the atmosphere. 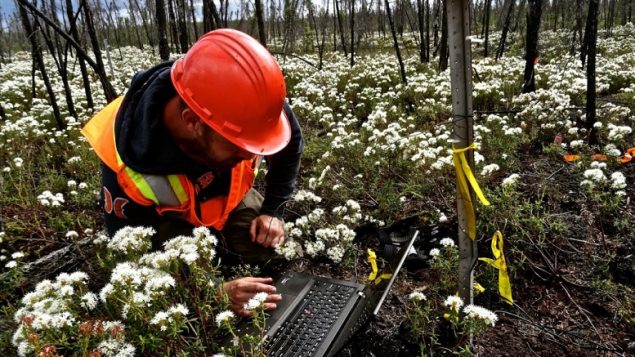 Gibson says because plant growth in slow in northern regions, the effects of a wildfire can last decades.

In addition, studies have shown that wildfires are becoming larger and more common, further exacerbating the situation. 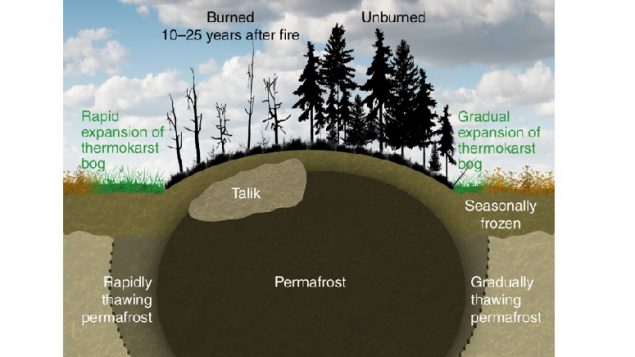 Simplified illustration of differences in burned (left) and non-burned (right) boreal forest atop permafrost along transects from thermokarst bogs to peat plateaus, within and outside historical burn areas. Taliks are continuously thawed soil layers between the permafrost and the seasonally frozen layers ( Gibson et al, 2018)

Gibson says the research is significant as previous studies and predictions of permafrost melt have not taken into account the significant effects of wildfires on the thawing of permafrost.