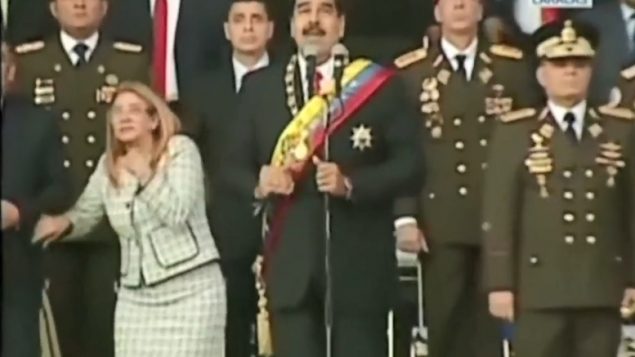 While giving a speech earlier this month, on live Venezuelan TV, President Nicolas Maduro and others show initial reaction to an explosion nearby, apparently of drones loaded with explosions The alleged assassination attempt would appear to show strong political dissent, or perhaps a government excuse to disrupt potential political rivals in light of the growing economic crisis and hyper-inflation in the country. (video screen capture)

Venezuela, once a prosperous country, is suffering from hyper inflation, a major economic crisis, and an ongoing exodus of its population to neighbouring countries.

Donald Kingsbury is a lecturer of Political Science and Latin American Studies at the University of Toronto. He is also author of the book…”Only the People Can Save the People: Constituent Power, Revolution, and Counterrevolution in Venezuela”

Venezualan President Maduro was re-elected for a six-year term in May in what some have termed was a rigged election. Countries like the Canada, the U.S and others consider him a corrupt, left-wing, semi-dictatorial leader responsible for many human rights abuses. 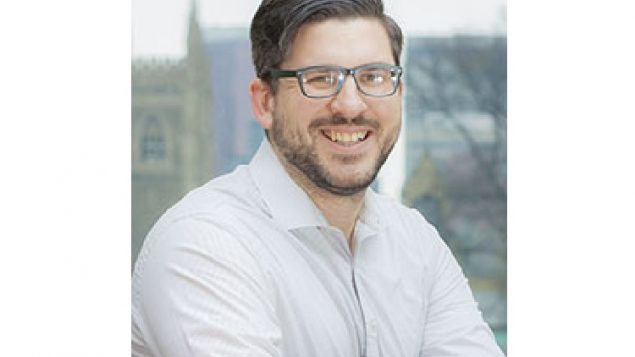 Donald Kingsbury (PhD) author and lecturer at the University of Toronto. (U of T)

Regardless, he faces an ongoing major economic crisis.

Literally hundreds of thousands, indeed millions, of Venezuelans have left the country seeking better conditions. This has resulted in concern in those countries and increasing restrictions on Venezuelans.

Ecuador, which has seen over 400,000 Venezuelas cross its border, is the latest to impose restrictions. Ecuador joins, Peru, Colombia, Chile, and Brazil which have begun requiring passports or other special documents in order for Venezuelans to enter. 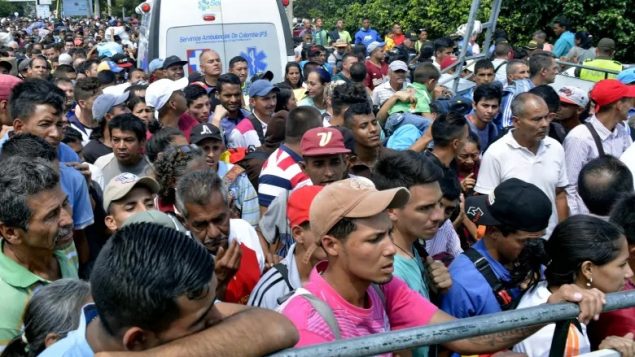 A photo made available by the newspaper La Opinion (via CBC), apparently shows thousands of Venezuelans entering Colombia through the Simon Bolivar international bridge in Cucuta, Colombia, in early February 2018. (Edinsson Figueroa/EPA-EFE)

The International monetary fund says inflation in Venezuela could reach a million percent, which would become one of the worst hyper-inflation crises in modern history.

To curb that President Maduro will introduce a new currency in a “paquetazo rojo” or ‘big red package’.  His plan includes a new “sovereign Bolivar”  will chop five zeroes off the currency, raise the price of fuel significantly, and a major rise in the minimum wage of  3,000 per cent.

There are serious doubts this will help and instead may worson the country’s situation as the currency will be based on a unit, “petro” based on oil reserves, but strangely not tied to it.

The increase in minimum wage and fuel price increases could serve to bankrupt some businesses, increase the government’s own bill for salaries, and possibly only increase inflation.

Meanwhile he blames “imperialist” countries for supporting the assassination attempt and waging an economic war on the country. However many analysts say mismanagement of the country’s main revenue source, the state owned oil company has caused production to drop by half, with revenue further hurt by lower world oil prices.

Professor Kingsbury feels that the country’s problems are not likely to improve in the short or even medium term, but he does hold out hope that the people themselves will be able to create a turnaround for the country.