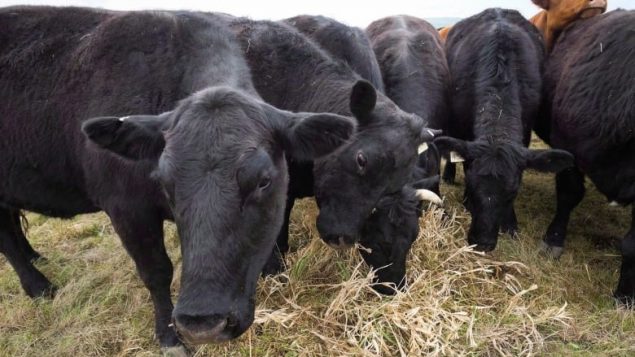 Cattle push for a little grass on a pasture. Dry conditions have meant poor pasture growth for grazing cattle in Alberta and the southern portions of the prairie provinces. (Jeff McIntosh-CP)

Cattle, ranching, and the cowboy lifestyle are a large part of the traditions in Canada’s western prairie province of Alberta.

The province is the world’s sixth largest exporter of beef. But a long and withering drought is causing great concern to ranchers in the province.

After a harsh winter and a long, cool and damp spring forced many ranchers to use up reserves of feed hay, they then faced a summer of hot dry weather in many areas of the province, drying up pastures.

In the southern portion of the province reports are that 60 per cent of the pastures are in only fair to poor condition.. 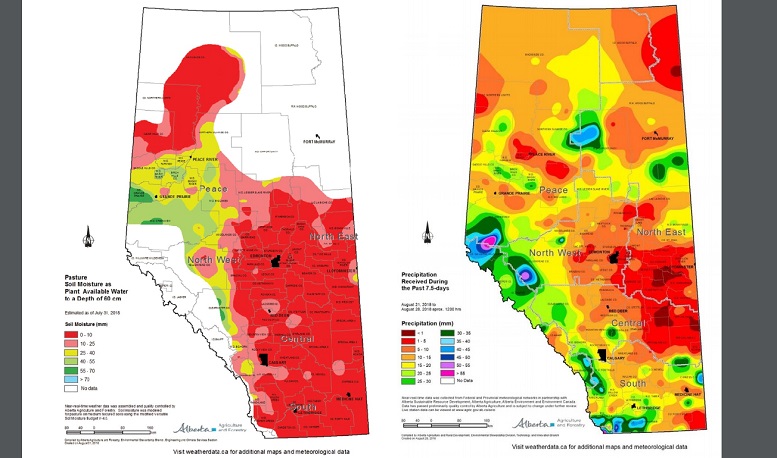 Alberta: Left=soil moisture conditions as of July 31, Right-precipitation for the week up to Aug 28 after the arrival at last of cold air and some moisture, but still showing drought (Alberta Agriculture and Forestry)

Similar conditions have been felt in large portions of southern Saskatchewan and Manitoba. This has not only hit pastures but alos farmers growing hay crops expected to be down by about 25 per cent even as ranchers are seeking feed for their herds already

As a result feed hay costs have doubled from las year to $200/tonne, while feed barley is up 30 per cent in price.

While droughts of this nature used to be relatively rare, perhaps a once in 50 year event, some farmers say this is the third year in a row they’ve faced tough drought conditions. 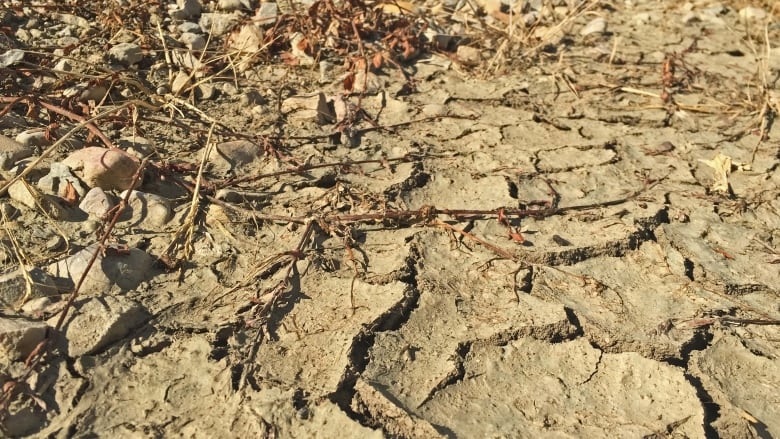 Drought could soon be the ‘new normal’ in Alberta, says a University of Calgary expert in drought adaptation. (Rick Bremness/CBC

A University of Calgary professor who studies drought was quoted in the CBC saying, “”It isn’t going to be 50 years between droughts. We’re going to be moving into a more constant state of dry”.

Many ranchers say they’ll be pulling herds from the pastures a month early. Because the costs of winter feed are so high, many are also saying they may have to sell portions of their herds, resulting in a major culling of Alberta cattle.

An Arctic air cold snap has spread through the province last week along with some much needed rain. However, ranchers say that for the most part this won’t change much for them this late in the season.