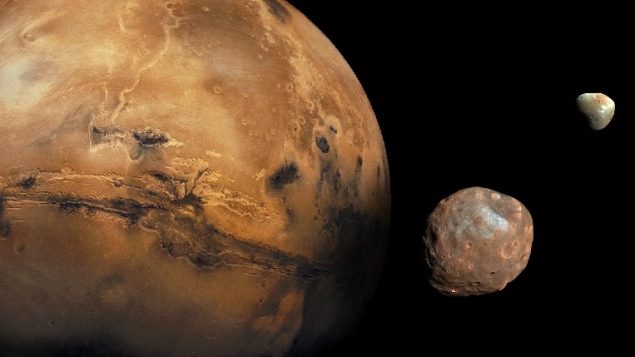 It was long thought they were asteroids that long ago became captive of Martian gravity and pulled into orbit around the red planet.

A new theory however suggests differently, helped by a meteorite that fell in Canada.

Professor Herd is co-author of the research paper published in the Journal of  Geophysical Research: Planets under the title “MGS-TES Spectra Suggest a Basaltic Component in the Regolith of Phobos”  (open access until Oct 21/18- here) 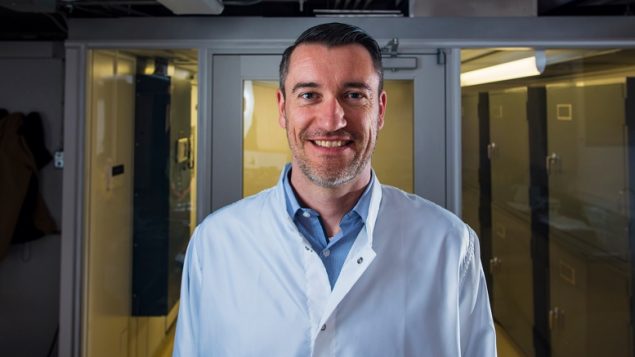 The moons of Mars are the “darkest” in the solar system, which would seem to suggest their origin as asteroids, although scientists have always felt the orbits weren’t quite right for that theory.   However, recently a group suggested testing the light reflectivity from an actual piece of a dark asteroid and compare it to that of the moons. 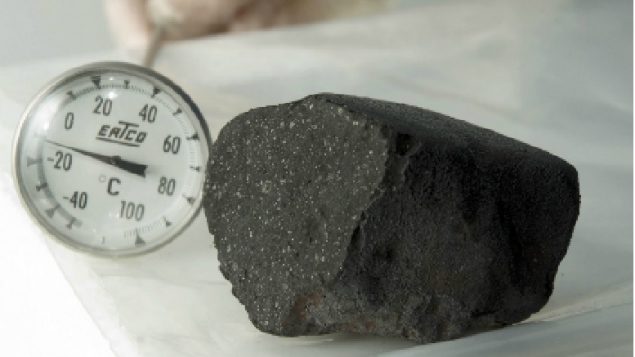 This sample from the U of A’s Meteorite Collection is the largest pristine fragment of the Tagish Lake meteorite, from which the sample used in the study was taken.  It is unique in its make-up and that it was frozen when it landed and has been kept frozen ever since to preserve many of its elements. The original meteor may have been up to ten tonnes, but blew up into fragments when hitting Earth’s atmosphere. (Michael Holly- U Ab)

The dark chunk of asteroid fell on frozen Tagish Lake in northern British Columbia in 2000.  Herd sliced a small piece from the still frozen meteorite and a group of international scientists used information from data recorded in 1998, when the Mars Global Surveyor Thermal Emission Spectrometer (MGS‐TES) passed Phobos during its orbit around Mars.

So where do the moons come from?

The testing showed that the two moons reflectivity did not match that of the Tagish Lake meteorite, further reinforcing the idea the moons were not in fact captured asteroids. 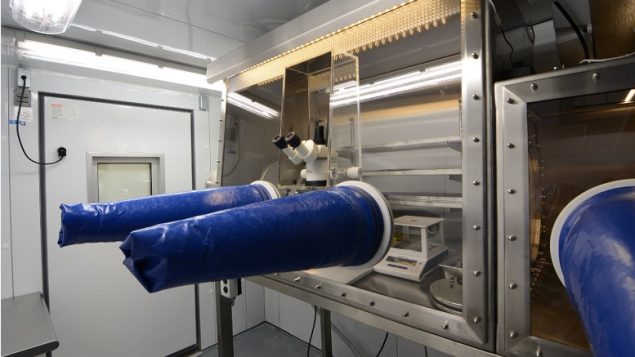 The specialised cold room and isolation chamber “glove box” where the meteorite is kept. Originally as it landed in winter, it was frozen and has been kept frozen which means that many unique intrinsic organic compounds- the building blocks of life- are preserved in this specimen which makes it possibly the most pristine example of an asteroid available. (University of Alberta)

So where did they come from? The scientists now feel they were blasted from Mars in an ancient collision, very much like how Earth’s own moon was created, although on a smaller scale.

But still, the moons differ from Mars surface. It is thought that the collision probably occurred so far in the distant past that the moon’s material is likely part of Mars original crust, now long buried.  As professor Herd says, Phobos and Deimos may be “fossilised” remnants of Mar’s early crust.

Professor Herd says more information about our nearest neighbouring planet will be gathered during upcoming Mars missions, which will see robot vehicles gathering samples of the Martian surface.

Scientists involved in this study include researchers at Stony Brook University in New York, Northern Arizona University, Kirklareli University in Turkey, and the Space Science Institute at Boise, Idaho.