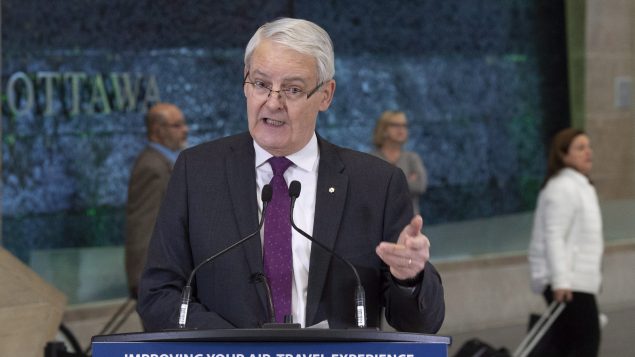 Passengers arriving at the airport walk past Transport Minister Marc Garneau as he speaks about passenger rights during a news conference at the airport in Ottawa, Monday December 17, 2018. (Adrian Wyld/THE CANADIAN PRESS)

Canada to force airlines to compensate passengers for delays, overbooking

Canadian passengers who face flight delays or are bumped from their seat due to overbooking will be eligible for compensation under the federal government’s new proposed regulations for air travel.

Transport Minister Marc Garneau unveiled the first draft of the proposed passenger bill of rights at an event at the Ottawa International Airport on Monday.

Under the proposed regulations, which will apply to all airlines operating in Canada, flying in and out of the country, airlines will be forced to pay up to $1,000 for flight delays and cancellations within their control that are not safety-related.

Airlines will have to book a passenger on a competitor’s flight if the delay exceeds nine hours.

Passengers bumped from flights due to overbooking or scheduled aircraft maintenance can apply for compensation of up to $2,400.

The new regulations also require that passengers be allowed to leave the airplane if a tarmac delay lasts for over three hours and there’s no prospect of an imminent take-off.

“Our government’s goal is simple,” Garneau said. “It is to provide air travelers with fair and balanced passenger rights, the ones that they deserve.”

Best in the world

These new draft regulations, fall under Transportation Modernization Act, which became law in May of 2018.

“We reviewed their regulations and we also undertook our own consultations, right here in Canada in order to act in the best possible interest of Canadians,” Garneau said.

“Canada’s approach when it comes to travelers’ rights is among the most ambitious and the best in the world.”

Once the draft regulations are officially published on Saturday, Canadians will have 60 days to comment and propose changes, Garneau said.

“We want to get this right, this is the last opportunity for people to make comments on it and we think this is the right thing to do to make sure that we get the best passenger rights that are possible for Canadians,” Garneau said. 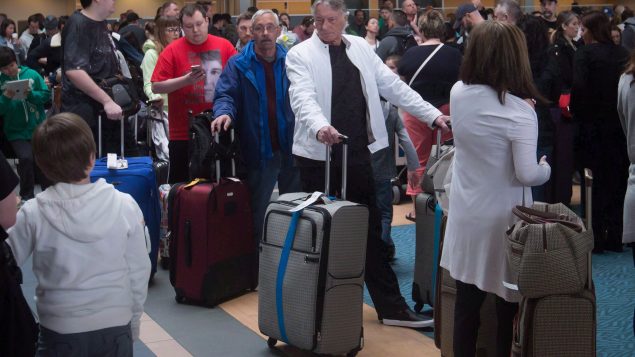 Passengers wait in a lineup due to a problem with the baggage system in U.S. departures at Vancouver International Airport in Richmond, B.C., on Saturday April 1, 2017. Under the propose air passenger bill of rights, airlines will have to compensate their passengers for delays, overbooking and lost luggage. (Darryl Dyck/THE CANADIAN PRESS)

An airline ticket is a contract for service, which imposes obligations both on the airline and the traveler, he said.

“Except in circumstances which are beyond their control we are going to make sure that airlines treat their passengers with the respect they deserve and live up to their commitments,” Garneau said. “These regulations establish clear and consistent standards of treatment.”

The final consultation period ends on Feb. 20. After that the officials will look at the comments they have received and will craft the final regulations, which will then have to be approved by cabinet, Garneau said.

Garneau said the government hopes to have the regulations ready by the summer of 2019.

“With the draft regulations announced today, Canadian air passengers are finally close to having the same kind of rights that U.S. and European travellers have had for many years,” said Jeff Walker, CAA chief strategy officer. “Gone will be the days when passengers stood at a counter, faced with bad news, and had no idea what their rights were or what they could ask for.”