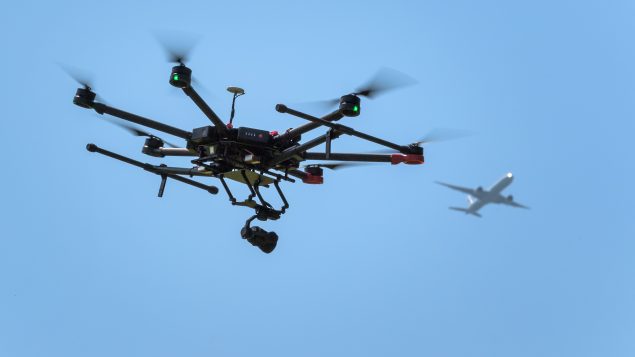 A drone flies as an airplane is seen in the background outside Zurich on August 23, 2017. (Fabrice Coffrini/AFP/Getty Images)

The federal government has adopted tough new regulations for the use of drones in Canadian airspace, banning drone flights near airports and emergency scenes, as well as operating them while drunk or high on drugs.

The new regulations, which come into effect as of June 1, will also require drone operators to register their drones and pass an online test to receive certification to continue operating them, said Transport Minister Marc Garneau as he unveiled the new rules in Montreal Wednesday.

These new changes apply to drones that weigh between 250 grams and 25 kilograms and are operated within the pilot’s line of sight, regardless of whether the drones are being used for work, research or for fun, Garneau said.

“The government is resolved to improve the security of aviation and of the public,” Garneau told reporters in Montreal. “At the same time we are also resolved to encourage and support the possibilities of innovation and economic growth that drones represent.” 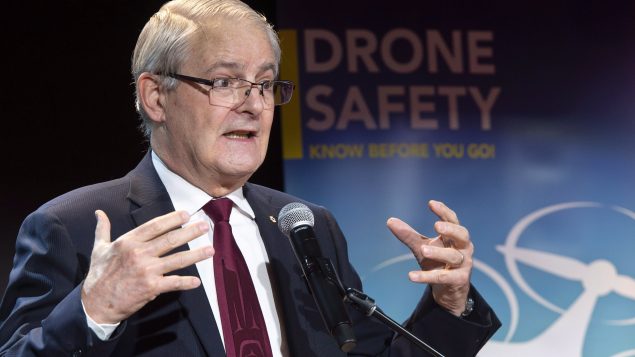 “This is very serious,” Garneau said. “If you put an object in the air, in the airspace of this country, you are in fact piloting it and if you cause an accident that can have enormous repercussions.”

The new regulations come with steep fines of up $25,000 or even criminal prosecution for certain infractions that endanger safety of other people or aircraft.

It will cost $5 to register a drone, and the pilot exam for basic operations costs $10, while the test for advanced drone operations is $25.