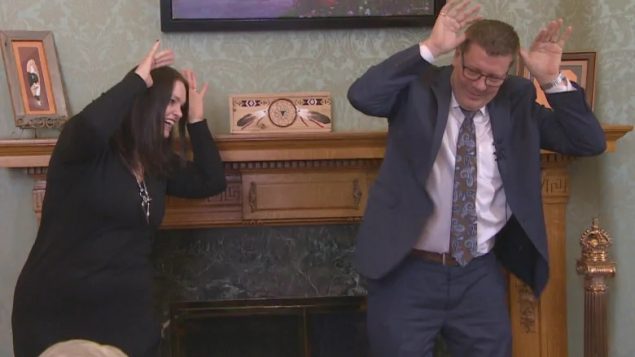 Linda Otnes Henriksen, vice-mayor of the Norwegian municipality of Stor-Elvdal, teaches Saskatchewan Premier Scott Moe the moose dance. Henriksen's town currently holds the record for largest moose statue in the world, a record that once belonged to Moose Jaw. That's all about to change. (Brian Rodgers/CBC)

Mac the Moose will be reclaiming his title

It’s probably fitting that the dispute ended with the two opponents taking a shared selfie.

The mayor of Moose Jaw, Saskatchewan and deputy mayor of Stor-Elvdal, Norway found a way to make peace.

At a “Moose Summit” last weekend on the Canadian Prairies, Fraser Tolmie and Linda Otnes Henriksen called off their battle over which town has the world’s biggest moose statue, a dispute that had been running close to four years 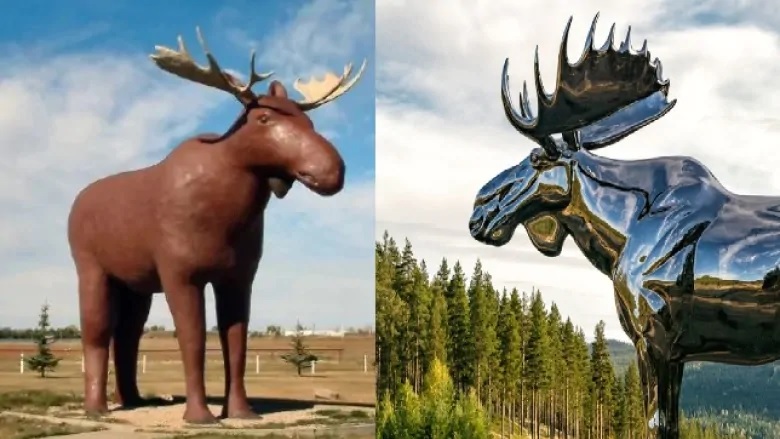 Moose Jaw’s Mac the Moose, left, was dethroned as the largest moose statue in the world by Storelgen in Norway. But plans are in the works to replace Mac’s antlers, which will return the title to Moose Jaw. (Mariusz.ks/Wikipedia, Shutterstock)

Mac the Moose, the long-time champ who came into the world in 1984, remains a tad shorter, at 9.8 metres.

That’s all about to change.

It appears the title will be going back to Mac.

Under the compromise reached at the summit, Mac’s antlers will be altered–raised actually–to allow him to reclaim his title, thanks to a $25,000 injection of cash from Moosehead Breweries, one the finishing touches on of a far-reaching campaign. 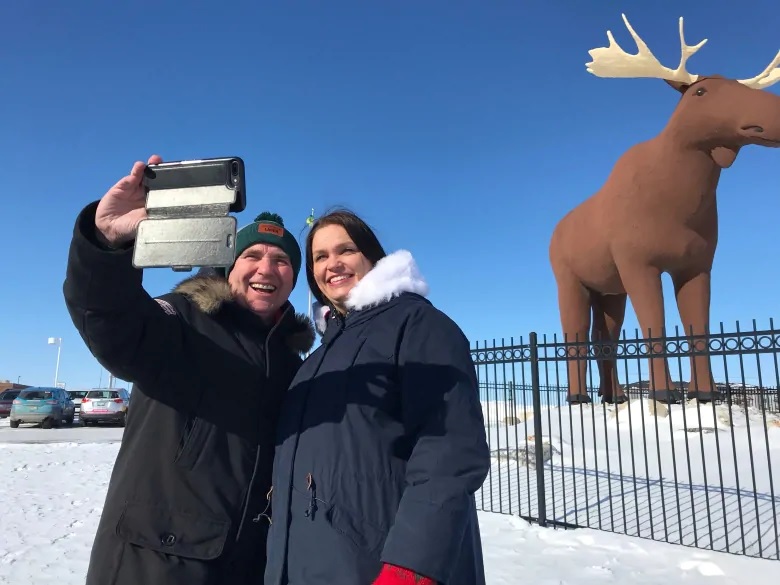 Moose Jaw Mayor Fraser Tolmie and Stor-Elvdal’s Deputy Mayor Linda Otnes Henriksen made peace in Moose Jaw last wekend-, sealing the deal with a selfie in front of Moose Jaw’s Mac the Moose. The two have been trading friendly jests on an international stage for weeks about which municipality had the biggest moose statue in the world. (Tyler Pidlubny/CBC )

Storelgen, meanwhile, will “forevermore be known as the shiniest and most attractive moose in the world.”

As part of the deal, Moose Jaw also agreed to recognize Storelegen as a “pretty awesome-looking moose.”

I spoke with Mayor Tolmie about the negotiations.

The peace agreement reached, the two sides are now discussing how they can put more dough into their city coffers as a result of the dispute.

Henriksen says there are some in Norway who want to make a children’s book based on Storelgen. 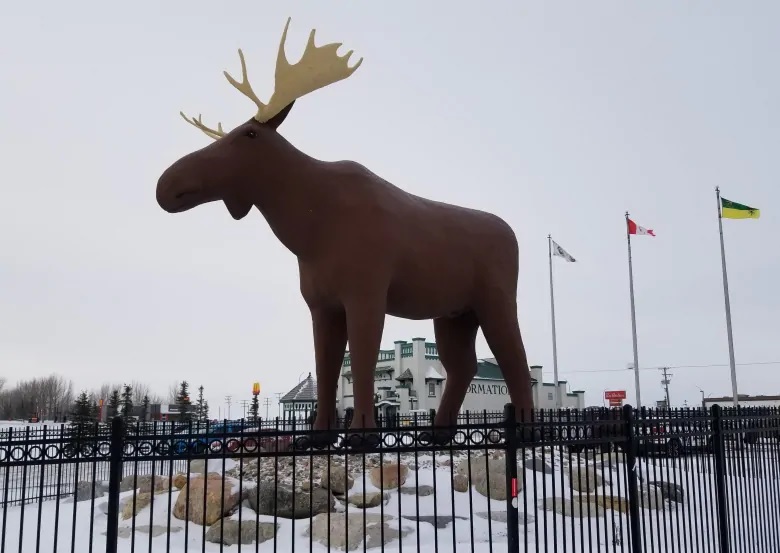 The once and future title holder. Mac the Moose will reclaim his title of largest moose statue in the world after a $25,000 donation was announced by Moosehead Breweries. (Cory Coleman/CBC News)

“Maybe one of the other books can be about Mac the Moose and Big Moose…I’m thinking this is a great story and it’s a funny story,” she says

Talks are now underway about the possibility of twinning the two towns in search of increased tourism.

Both sides, after all, say they are legit “moose-ipalities.”