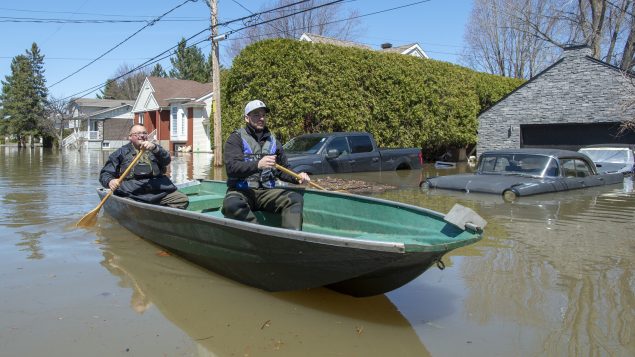 Evacuees make their way along a flooded street to retrieve some belongings from their homes on Monday, Apr. 29, 2019 in Ste.Marthe-sur-la-Lac, Quebec. (Ryan Remiorz/THE CANADIAN PRESS)

No respite from flooding in Quebec and Ontario, but waters begin to recede in New Brunswick

Thousands of people across Quebec and Ontario face flooding for several more days, while floodwaters in New Brunswick have finally begun to recede.

Authorities in southeastern Ontario along the border with Quebec are bracing for even more flooding as water level in Ottawa River are expected to crest on Tuesday or Wednesday.

Thousands of volunteers, residents and members of the Canadian Armed Forces are in a race against time to beef up the defences that protect their homes and property from rising waters, as flooding has already shut down roads and bridges and forced the evacuation of thousands of homes along the swollen river.

#Ottawa River levels have reached the 100-year flood threshold in Aylmer, Hull and Pointe-Gatineau, while levels in Masson-Angers are less than 10 centimetres from the mark #OTTflood – https://t.co/UUCDn9xeyj pic.twitter.com/dD1kdSPLMS

Further down the stream in Quebec, where Ottawa River flows into the Lake of Two Mountains, rising waters breached a natural dike in Sainte-Marthe-sur-le-Lac, a suburb west of Montreal on Saturday.

More than 5,000 residents of the lakeside municipality were forced to flee with nothing but clothes on their backs as flood waters rushed into their homes in a matter of minutes.

Another 1,500 people were forced from their homes the following day.

Quebec Public Security Minister Genevieve Guilbault said Monday that the floodwaters are holding stable, and expected to remain near their current levels for the next few days. 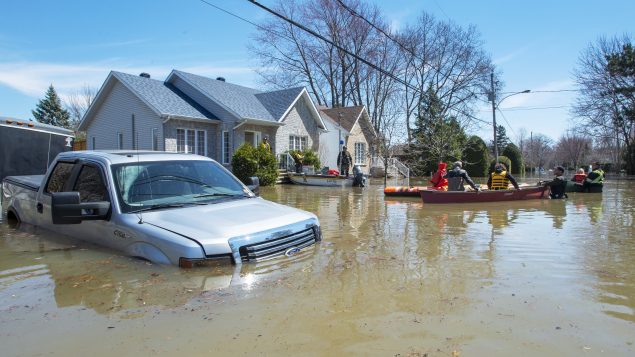 Throughout the province, 9,504 people have been forced from their homes, 6,422 houses have been flooded, while 3,488 houses have cut off from other areas because the roads are covered in water.

Meanwhile, floodwaters in New Brunswick are expected to begin to slowly recede in most areas, however, the water level in the St. John River from Fredericton to Saint John remains above flood stage.

The New Brunswick Emergency Measures Organization (NBEMO) urged residents along the Saint John River to continue to exercise caution. Several roads remain closed and cannot be used until they are cleared and reopened by officials. Drivers should continue to respect barricades, said Greg MacCullum, director of NBEMO. 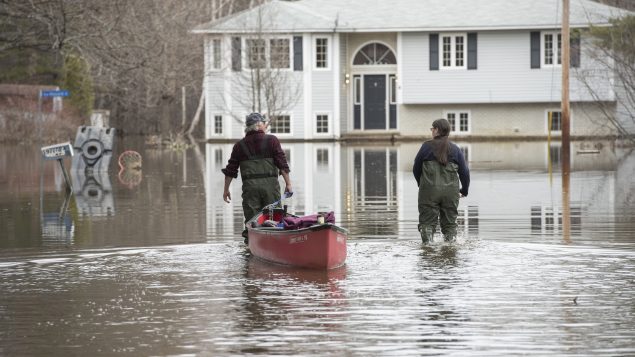 Keith McKay and Dee Branston use a canoe to carry food to a house on Jarvis Street in Fredericton, New Brunswick on Friday Apr. 26, 2019. (Stephen MacGillivray/THE CANADIAN PRESS)

He also thanked volunteers and first responders who have lent a hand to those affected by the flooding.

“The community support we have seen since the start of this difficult event has been outstanding and all volunteers should be commended,” said MacCullum.

“I also want to thank the firefighters, police services, municipalities, Red Cross, Armed Forces, Coast Guard, Department of Fisheries and Oceans and all other organizations involved for their dedication to affected New Brunswickers.”