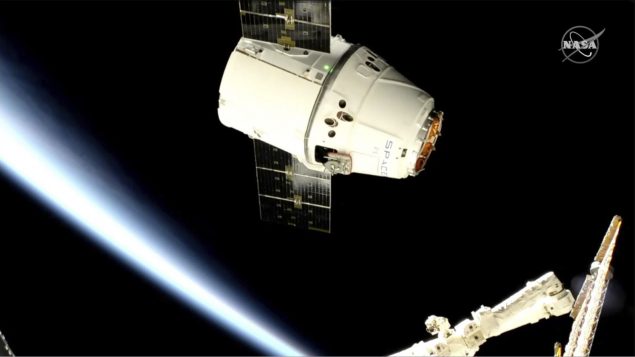 It was David Saint-Jacques’ very first “space catch”. The astronaut had, however, assisted his colleague Anne McClain two weeks ago to catch another cargo ship.

“Welcome on board, Dragon,” Saint-Jacques radioed. Speaking in both English and French, he congratulated ground teams for their help and said he’s proud every time the station’s 18-metre (58-foot) Canadian robot arm is used in orbit.

My crew and I are proud to be part of this today, representing the dedicated teams of talented people who every day make the seemingly impossible a reality.David Saint-Jacques, Canadian astronaut

Checkout this incredible time lapse video of this morning's capture of the @SpaceX Dragon cargo craft by astronaut @Astro_DavidS of @CSA_ASC, backed up by @AstroHague of @NASA. #AskNASA | https://t.co/cBNqC5JGaz pic.twitter.com/IUp0FnpoW2

Two and a half tons of cargo

The Dragon capsule, which was propelled into space by a Falcon 9 rocket, contained 2,500 kilograms of cargo, including 1.2 million tomato seeds.

These seeds will be sent back to Earth with the capsule in one month. They will be given to students whose mission will be to grow them as part of the Tomatosphere educational project.

It’s not too late for #Tomatosphere™! You can still spring into action and sign-up for Tomatosphere™ this year!

If your classroom is already growing above and beyond, don’t forget to submit your results for your certificate! https://t.co/Ms5uVSQ8L3
📸 by @AmandaGTeach #STEMed pic.twitter.com/cb283ZILXk

During their scientific experiment, they will measure and compare the growth of the various seeds.

The capsule is also expected to bring back blood and air samples for a Canadian study on changes in astronauts’ bone marrow in space.

SpaceX’s 17th delivery to the ISS 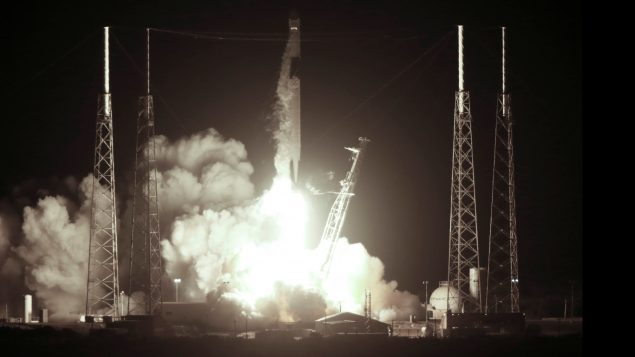 A SpaceX Falcon 9 rocket takes off loaded with a Dragon cargo craft during a resupply mission to the International Space Station from Cape Canaveral, Florida, U.S., May 4, 2019. REUTERS/Thom Baur

This was the second flight of the Dragon Capsule. The spacecraft has a small space station emblem on its side indicating its previews flight in 2017.

It was SpaceX’s 17th delivery to the International Space Station since it started in 2012. The Dragon capsules are the only ones capable of coming back to Earth intact.

Besides one Canadian, the space station is home to three Americans and two Russians.

With files from The Associated Press, Reuters and NASA